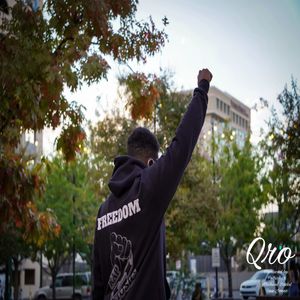 El Paso, Texas – December 4, 2020 – Following the success of his previous singles “Respect Me” and “This Is Life,” Qro is back with an anthem for young, marginalized people living through the tough times that 2020 has thrown at them. The new track, “Freedom” hits the music scene with a powerful burst of energy, musicality and lyrical intricacy that is sure to make you sit up and listen to what he has to say. This is no sleepy Christmas ballad; this punchy number will have you humming along whilst also hearing his message of empowerment and triumph over adversity.

Following the rise of the Black Lives Matter movement in 2020, Qro wrote “Freedom” as a response to the conversations, tension and new bonds being formed in society. As a young black man from North Carolina Qro has mourned the loss of community members such as George Floyd, felt the rage at the inequality society shows and felt the solidarity of rising up as a group to withstand the storm. Through the multi-layered lyrics of the track Qro presents a leader for disillusioned young people of minorities who are looking for direction and salvation. He intends to inspire his cohort to band together to be stronger and more powerful than ever before, in order to overcome the challenges facing them today including oppression, poverty, prejudice and isolation.

Speaking of his inspiration behind Freedom, Qro said;
“The people need to stand together and speak out loud. This song is my way of doing that – giving a voice to the people so that we can be strong together. Knowledge is power, stay true to yourself and fight together for freedom!”

The track is masterfully produced, with an energizing hip hop beat and punchy vocals, layered with a jazz piano refrain and bright brass section to create a rich sound that needs to be heard multiple times to pick up on all the nuances of the mix. All together, with the repeated call of ‘freedom’, it’s a stirring track that takes you along with its fast moving pace toward the peaks of the chorus and invites you to join in shouting out ‘freedom’ from the rooftops. Inspired by big hitting artists such as J Cole, this is a fresh new sound that gives innovation to the hip hop genre while paying tribute to the artistry of the style.

Since leaving the military, Qro has worked hard to fulfill his musical ambitions. He has gained a strong following and gets over 20k listens on Spotify a month. As a young, developing artist he has a bright future ahead of him, with a loyal fan base and a mature and relevant sound. His songs have been positively received and reviewed on radio shows such as Big7, Eargasm and TheBlock105, and have consistently received praise such as ‘a top tier production’, ‘highly regarded’ and ‘a great listen’.

“Freedom” will be released December 25th, 2020 and will be available on all platforms including Apple, Spotify, Soundcloud, and radio stations. “Freedom” Hoodies are available on his website in preparation of his upcoming release. Qro is interested in getting this song into Film/TV and other sync opportunities and can’t wait to release this one. You don’t want to miss it!

This Clarkton, North Carolina native began his official path in music at the young age of 19. Though he crafted and tuned his music skills all of his life, he took the leap into the music industry after being inspired by his mother and other local artists like J. Cole. He decided during his career in the military that he wanted to be a prominent and well-known artist in the music industry. In January 2019 he released his debut single “Tough Luck” and has been steadfastly making a name for himself in El Paso, Texas. Upon finishing his contract September 2019 and not knowing which city he would be in next, only made him more motivated and eager to take the steps necessary in his career to achieve his goals in the music industry. He is the owner and CEO of his business, Qronation “Inspired clothing for the inspired”. Qro has taken a lead in becoming an innovator for the next generation. With an insatiable drive to succeed and momentum building up, it’s only a matter of time before his presence is known.