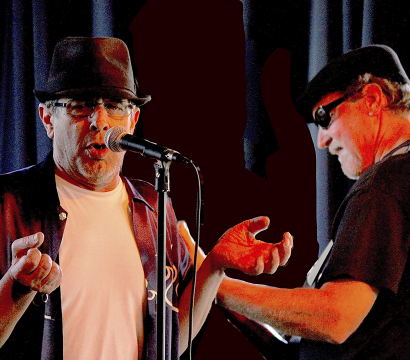 Creating moving and soulful musical compositions that are both unique and characteristic, Pape J & Richard are a powerful duo that has got the right ingredients to mix and fix with their striking and soothing Blues and Acoustic combos

Orange County, CA – April 4th 2021 – A fiery up-and-coming singer-songwriter duo Papa J & Richard is a true force to be reckoned with in the world of Soul and Acoustic music. The tuneful twosome is comprised of Jeffrey Hudson (Papa J) and Richard Hassebrock, as they meld and marry their vocal talents to produce the finest and most stunning musical compositions. Soaring through their musical career, the duo is driven to continue producing soul-stirring and moving Blues compositions that will help them achieve their own hidden potential.

Renowned in Southern California’s musical scene as a hard-working and iconic duo who continue to inspire and amaze with their unique and raw Blues compositions, Papa J & Richard are living Blues legends. The talented vocalists focus on the rich and varied genres of Classic Blues, Country and Blues Standards- experimenting and improvising with a dynamic musical sense.

Papa J & Richard’s music is dominated by strong, yet smooth vocals underscored by a hip and memorable tune that spins magic in all the right ways. Immortalizing the duo in the genre of Blues, the duo is a true sensation.

Encouraged by a burning passion for the genre, the duo is hopeful that their music will leave behind them a powerful footprint that revitalizes love for the genre. The talented group twosome has played and opened for several iconic Blues artists around the world, including Bobby Bland, Taj Mahal and The Fabulous Thunderbirds, to name a few. Having played at numerous musical settings and concerts, Papa J & Richard are still enlivened with infectious energy and fiery passion to continue their legacy of being show-stopping performers and musicians.
####

A sensation duo that continues to create smooth and soulful Blues compositions, Papa J & Richard are maestros when it comes to enriching Blues and Acoustic music.

Papa J, named as Jeffrey Hudson at birth and later adopting his artistic name, was raised in South Central Los Angeles and got into the musical scene as a young child. The budding artist began performing when he was 14 and has continued to enthrall and experiment with his talents and musical tastes till date. Today, the 70-year-old is as driven as he was when he first got into music to imbue his music with a unique spirit and beauty.