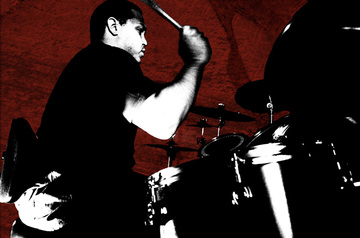 Harbinger Uprising – Line in the Sand

Musical energy and the exchange between audience and a song or band can be such a crucial lifeblood for a composer gathered in the name of fulfilling exhilarating music for music fans. Some of this applies to Loud Alternative Rock based music and Alternative Rock popular in the 90’s. It may not be for everyone in 2016 but no one can deny it has a very dedicated cult following. It’s almost comparable to an intellectual monster unleashed for the sole reason of getting your ass thinking.

Tennessee based Harbinger Uprising seems to have a firm hold on energy with their melting pot of fun Live-Rock sounds and an unmistakable vibe that will warp many into musical submission without even trying. This latest 19 song CD is an explosion deriving all your Past Psychedelic thoughts and fears into a musical landscape. We start off with the intro banger, “Breathe Through The Choke”, where your mind and body will ignite and have no choice but to get into this music. We then move into the brilliant melodic bliss of breaks with “The Whistleblower.”

Their approach conveys a range of tones, from melancholic solo pieces to feisty and danceable punk that’s a bit out of control – like a Three Doors Down on steroids. Their music transcends musical boundaries stylistically as evoked in the lyrics’ ability to portray universal life experiences. It’s clear that time has not slowed the progress of this amazing style of music in the least. It feels good to know there are still bands that rock out. Harbinger Uprising is known for their super exciting and live energy infused sound. This is one artist on a mission to prove good music is still alive.

Now, I can’t claim to be an expert on this unique style of music, or even pretend to know comparables to artists like System of a Down, Foo Fighters, Audioslave, Rage Against the Machine and Soundgarden. I

can also hear Black Sabbath, Andrew Bird’s Bowl of Fire, and Kells. I get the impression this rock is still popular for 2 primary reasons. 1: it’s extremely stimulating to the senses, and 2: the music will cause you to think/groove, thus creating an almost euphoric effect when dancing – especially if you are slightly inebriated. Loud rock music did the same things many years ago, so perhaps this heightened sound stimulation is at the core of it all. Track 3, “Heroes”, keeps it honest and I can really relate to this track as it delivers acousticly amped up exuberance and mind numbing lyrical content. Yep, this CD has it all with 19 tracks in total. Track 7, “One Day Alone”, and Track 11, “Resolve” are strong pieces, and the last two tracks, B-Side versions of “Breath Through the Choke”, are pretty cool in their own respects.

Whether you’re a fan of this style of music popular in the 90’s or not, Harbinger Uprising shakes the tree with their newly released CD. These tracks have a little something for everyone, and is well worth the listen. At the least, it will be sure to remind you why this style of music was so popular – and it’s making a comeback. Don’t fear the intellectual rock monster, folks. He’s here to tell us the truth, and make it better because were not lying to ourselves. Just let the spirit move you and you will come to appreciate what this style of music is really all about.

5 thoughts on “Harbinger Uprising – Line in the Sand”