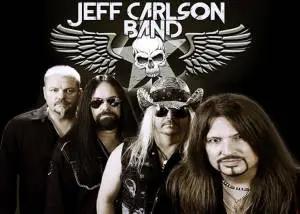 Las Vegas, Nevada – January 2, 2020 – Las Vegas, Nevada’s Scorchers Of Melodic Hard Rock, the Jeff Carlson Band, have announced that they have inked a worldwide deal with RFL Records. The band delivers a high dosage of hooks with their melodic hard rock style, that taps into the glory days of the late 80’s and early 90’s and pulls that energy into the new millennium. With heavy guitars, high energy melodies and a heart pounding backbeat, JCB blast the arena rock style into the spotlight and into the ears of today’s young listeners.

The bands history is one of coming full circle in a sense. In 1998, Jeff met Robbie Wolfe and Cory Kay and started a band originally called “Angel Park” and later “Liquid Skye.”  They had some moderate success on the local scene sharing the stage at the House Of Blues and various clubs in Las Vegas with heavy-hitters Slash, Joan Jett and The Blackhearts, U.F.O. Enuff Z’ Nuff and XYZ just to name a few. Fast forward to 2018, Jeff, who at that time lived in Tucson, Arizona, signed a distribution deal with Potomac records and moved back to Las Vegas.

He reconnected with Robbie Wolfe and Cory Kay and injected new drummer Mike Mitlying into the mix and together formed the Jeff Carlson Band. In the year that they’ve been together, they have released the singles “Never Be Another You,” “So Long” and “Screamin’ Inside” along with their new E.P. “Second Chance.”

The immediate success has garnered shows with Lita Ford, Bon-Jovi’s-Phil X and The Drills, Faster Pussycat, Bang Tango, Firehouse, Jack Russell’s Great White, Electric Radio Kings and a sold-out show at House Of Blues at Mandalay Bay in Las Vegas. Wrap that up with shows at Count’s Vamp’d in Vegas and the Whisky in Los Angeles and you have a band that is hungry to prove their metal. Jeff Carlson Band is proud to sign with RFL Records and will be releasing a new album in early 2020 along with some bonus music that will feature, none other than six-string master Frank Hannon.