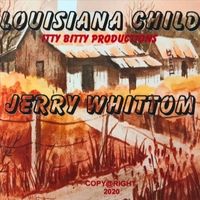 Tiburon, California – March 12, 2020 – Jerry Whittom may call California home today, but he’ll always be a Southern boy at heart. Showcasing not only a lifetime of appreciation for all things music but where he came from, Jerry Whittom takes us for an audible journey south with ‘Louisiana Child.’

He has been writing since he was only 11-years-old. A few short years after that he was on stage. Lately, the singer-songwriter has noted how his memories of his time down south have come flooding back, causing his pen to move, and his creative juices to flow. The end result, his 2020 release.

‘Lousiana Child’ comes two years after Whittom’s 2018 debut, ‘The First Responders.’ In that time one can hear his growth as a true storyteller and musician. Songs like “Still Dreaming” and “Hello Mama” showcase such emotion while the title track and “Firefly” ignite a fire in all who listen as their energies are electric. Fusing his love of country, rock and even a little bit of the blues, Jerry Whittom delivers a well-rounded record for fans of everyone from Kenny Rogers to Anne Murray.

Those interested in adding new country to their playlists, reviewing ‘Louisiana Child,’ or interviewing Jerry Whittom can reach out via the information provided below.