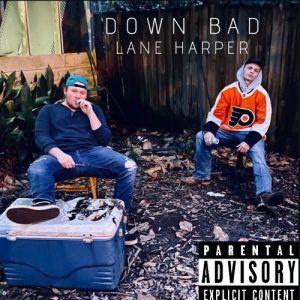 Batesville, Mississippi – May 6, 2020 – Versatile rapper Lane Harper showcases he has no shortage of material up his sleeve. With one album already released this year, he has big news. He’ll deliver a new mixtape this fall.

Before his new mixtape drops October 1, 2020 – audiences can get in deep with his first release of the year, February’s ‘Down Bad.’ 15 tracks deep, ‘Down Bad’ presents almost an hour of finesse and prowess across the board. From the killer intro that kicks off the record to songs like dynamic “Dear Molly” the chilled ways of “Hate You” featuring Kojau, every track pushes his artistry further than the last.

Lane Harper has been making music independently for the past decade. He taught himself how to engineer, and with no guidance at all has delivered stunning performances on not only ‘Down Bad,’ but on past releases ‘Porchin’ and ‘Passion’ as well. As for his latest, it was a labor of love for roughly two years. It’s available now on Soundcloud along with his other past releases. His next release, a new mixtape, will be out on all major streaming platforms and sites on October 1, 2020.

Those interested in adding new hip hop to their playlists, reviewing ‘Down Bad,’ or interviewing Lane Harper on their site, podcast, or radio show can reach out via the information provided below.

About:
Lane Harper is going above and beyond in 2020. He dropped ‘Bad Down’ in February, and has just announced his plans to release a new mixtape come October.