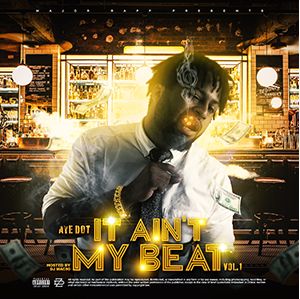 His latest mixtape (It Ain’t My Beat Vol .1) is the first installment to a series of self-explanatory mixtapes he plans to release in the near future. It will be available 6/1/2020  for streaming and download on (datpiff, and sound cloud). He has other releases as well from previous years which can be found on all streaming platforms.

“I won’t die until I touch a million or I’m Multi, or I, stand next to the greatest of all Time”

It Aint My Beat Vol.1 HOSTED BY DJ MAC90 Aye Dot is back with his latest mixtape It’s Self Explanatory! Dive In!!!! Follow Us on Instagram @Aye_izzy7 @El.M.V @Bigwill_Majorrapp @Philly_bul_Upt Apparel By @Fnfredericnoir GFX Provided by MajorRapp_graphix