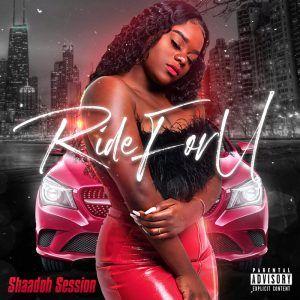 Jacksonville, Florida – May 7, 2020 – Shaadoh Session presents vocal excellence laid out across a modern R&B soundscape on her new single, “Ride For U.”

It is no surprise Shaadoh Session found her way to music. She grew up watching her mother, Candee, handle her own in the music industry in the ‘90s. Shaadoh Session was just eight-years-old when she started to write and sing originals, but it wasn’t until after the birth of her son in 2015 that she began to record the lyrics that had been collected in various notebooks over the years.

Fast forward to March 2019. The mother of one was about to add a daughter to her world and was feeling extremely vulnerable. Right after her daughter came into this world, Shaadoh Session found herself penning her latest single. A song she now dedicates to the one who she found herself deeply in love with that left her with a broken heart. With a heart in shambles, she soon packed her life and kids up and moved to Clearwater, Florida for a change. It proved to be a great call as she was discovered in January 2020 by Risky Bizness Entertainment’s CEO Alfonsa Riley who is now her manager.

With a neo-soul meets alternative R&B vibe, fans of Jhene Aiko and Summer Walker are going to want to embrace Shaadoh Session as their next musical obsession.

Those interested in adding new R&B to their playlists, featuring “Ride For U” on their site, or interviewing Shaadoh Session for their site, podcast, or radio show can reach out via the information provided below.

To hear “Ride For U” from Shaadoh Session, please visit: https://open.spotify.com/track/5msBH98GRbja4q2upCrDZi

About:
Shaadoh Session is on a path leading straight to the top with her latest single, “Ride For U,” out now.