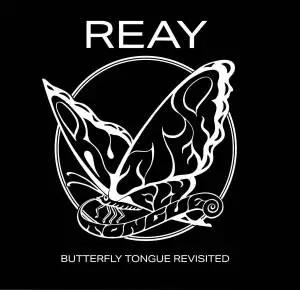 Ontario – December 19, 2019 – Canadian-based indie alt-rock band Reay uses euphoric melodies and hypnotic rhythms to cocoon their songs in a writing style deeply rooted in popsmithery. With an incredible sense of space between instruments and a heavy thickness of sound simultaneously creating three-dimensional cares to seduce listeners’ ears, they brought their best selves to the table with their 2019 release, ‘Butterfly Tongue Revisited.’

“This has been a project of perseverance. Now it’s finally finished. And it’s the most soul-cleansing experience of my life.”

Unlike the insubstantial bits and bytes of automated musical fluff that stream into playlists one day and vanish without a trace the next, ‘Butterfly Tongue Revisited’ is music that grabs listeners instantly and holds fast. Expertly and artfully crafted, carefully arranged and thoughtfully sequenced to deliver a moving musical experience that is simultaneously transcendent and transfixing, timely yet timeless, familiar yet fundamentally unique. There are sonic, stylistic and songwriting elements of everyone from Pink Floyd to The Verve, Death Cab For Cutie to War on Drugs — all topped with Murray’s soulfully raspy pipes and poetic lyrics, and filtered through an adventurously.

“I’ve heard the album and, save for anything Gord (Lightfoot) has done, this is the best album anyone in Orillia has produced…I have a few albums like that, Dark Side of the moon…Moving Pictures…Butterfly Tongue Revisited now holds that distinction in my collection” – John Swartz – Sun Online Media

Of course, for Reay, the trip is only beginning. With ‘Butterfly Tongue Revisited’ finally taking flight Murray is already looking down the road for the next horizon to chase. “I’ve got a lot of songs in the works,” he says. “I can’t wait to start writing new stuff and recording again. My goal is to make four or five more of these.”

Those interested in adding new rock to their playlists, reviewing ‘Butterfly Tongue Revisited,’ or interviewing Reay can reach out via the information provided below.

About:
For Reay — Sean Murray, guitarist Ryan Smith, bassist Chad VanDusen, drummer Matt Copeland, and Bayze Murray on guitar/keyboards — the trip has just begun. With ‘Butterfly Tongue Revisited’ taking flight the band hopes to have the opportunity to have this album heard by the masses.