Scott Paul Shines Brightest “When The Sun Goes Down” 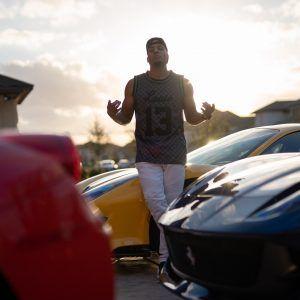 Newton, New Jersey – April 1, 2020 – Late last year Scott Paul debuted his latest single, “When The Sun Goes Down,” to a couple of thousand people live. Come New Year’s Day he dropped it. Now he’s ready to impress all over again by adding visuals to the mix. For Scott Paul went above and beyond to bring the music to life in the newly released video for “When The Sun Goes Down.”

As far as videos go, “When The Sun Goes Down” showcases a life of luxury that many can only dream about in a mere three minutes. From fast cars to top-shelf bottles to fine women, Scott Paul displays all of that and then some in his newest video. But like most videos, it’s only as good as the song and thankfully “When The Sun Goes Down” is a banger that doesn’t quit. From the press of play, audiences are hooked and hitting repeat as soon as it comes to an end.

Perhaps all this spice of life comes from where Scott Paul got his start, Miami. While he didn’t stay there long, some of that city rubbed off as he and his single, Haitian immigrant mother and two siblings relocated and made a home for themselves in New Jersey. There Scott Paul’s love of clever wordplay was often encouraged by his mother. His dreams and ambition never questioned. His love of singing spawned from hours of Michael Jackson and Usher, but he soon found himself quite enamored with rap thanks to Eminem and DMX.

To date, Scott Paul has taken the stage at countless venues across the tri-state area from dive bars to historic venues. The seasoned performer has also opened for some of the biggest names in music including J. Cole, the late Mac Miller, Meek Mill, Fetty Wap, A Boogie wit Da Hoodie, and many more.

Those interested in adding new hip hop to their playlists, featuring “When The Sun Goes Down” on their site, or interviewing Scott Paul can reach out via the information provided below.

About:
Scott Paul burst into the scene a mere three years ago with a music video for his single “Je Ne Sais Quoi.” The song featured New Jersey native Justina Valentine, the talented artist known for being in the cast of MTV’s ‘Wild n’ Out.’ The connection was made through producer Eddie “Shy Boogs” Timmons at So Amazin Studios in Clifton, NJ, where Scott records all of his records. Brian “Peoples” Garcia mixed the track. This duo is well known for breaking Fetty Wap. At the end of 2017, Scott formed his company, Ill Intent Entertainment, LLC after being tired of how certain facets of the industry are run, he decided to take matters into his own hands. In 2018, Scott Paul released his R&B/Pop single “Tequila” which drew attention from audiences around the world, becoming his biggest single to date. Since then, Scott has released an album and several singles. Now 2020 is gearing up to be his busiest yet.