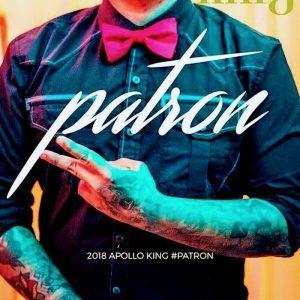 Mexico City, Mexico – March 25, 2020 – As the world continues its nonstop trip around the sun, everyone inhabiting earth is always changing, always pushing forward. Whether it be scientific discoveries or the evolution of music, we’re always looking ahead for what’s next. Well today, in terms of hip hop – we found it with Apollo King 47’s “Patron.”

“Patron” at its core if a hip hop track. Apollo King 47 lays down his rhymes with ease, but what makes him stand out and makes this song a titan among the rest is the mesmerizing guitar interlaced throughout. Written and performed solely by Apollo King 47, his words are guided by the strings of his guitar, creating an audible experience like no other.

Apollo King 47 was like any typical teenager in love with music, moved by the lyrics of his favorite artist. Only he decided he didn’t just want to listen, he wanted to be a part of the action. So in his early teens, he picked up a pen and started creating his own songs. Today he not only rap and plays the guitar, but sings a myriad of originals when he steps on stage, as well as crowd favorite covers in both Spanish and English. This multilingual dynamo is also a producer at the head of the table at his record label.

Those interested in adding new hip hop to their playlists, featuring “Patron” on their site, or interviewing Apollo King 47 can reach out via the information provided below.

About:
Apollo King 47 pours everything he has and then some into his latest single, “Patron.”