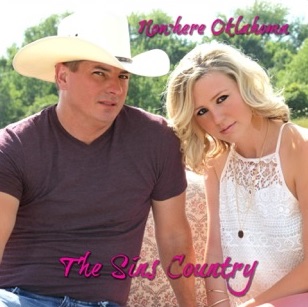 Nashville, Tennessee – May 2, 2019 – The Country world has been rocked before by husband and wife pairings in the past with Garth and Trisha, and even Faith and Tim, but The Sins Country are more than a couple of songs. Kristen Welch and Joe Sins are a bonafide duo working together through and through. Showcasing their beautiful Country partnership on their third studio release, Nowhere Oklahoma.

A new EP for Country fans near and far, Nowhere Oklahoma features half a dozen stellar tracks. To the striking title track to Kristen’s powerhouse performance in “You Own Me,” every track delivers more than the last. By the end, fans will be yearning for more. Which they can get with The Sins Country’s previous records, and out on tour. They’ll be playing in Tennessee and Montana from now throughout the fall. Check here for dates.

The Sins Country have been making waves since their debut single, “Romeo and Juliet Sparks” hit the Top 50 on the Music Row Country charts. They were also the only indie artist to debut at the #1 spot on Yall Wire with “Muscadine” and maintain that position for almost three months in 2012. It was that same year that their album by the same name dropped. With Nowhere Country, The Sins Country teamed up with the talented songwriters Rocc Nobles and Marty Simon; Rocc co-wrote “Worst Storm Man Ever Made,” and “Change” while Marty co-wrote “Money.”

About:
The Sins Country is a Country duo consisting of husband and wife; Kristen Welch and Joe Sins. They’ve had great success as indies and are continuing to make a name for themselves with the release of their third studio album, Nowhere Oklahoma.