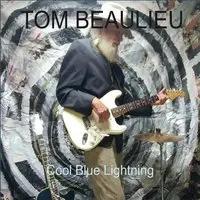 Taunton, Massachusetts – December 10, 2019 – The past year has been nonstop for Tom Beaulieu. After dropping ‘The Bird Houses’ and ‘Zombies On Zambonis,’ he’s gone and released his third record of 2019; ‘Cool Blue Lightning.’

‘Cool Blue Lightning’ blends the heart and soul of country and blues with the passion of rock to deliver music fans of everyone from Bob Dylan to Neil Young would enjoy. Songs like “Hope Ya Don’t Blow It” and “New Song of the Night” help this jam-packed five-song EP come alive from start to finish as Beaulieu delivers an entertaining ride throughout with the help of his brother, Eric, who not only provided backup vocals but the artwork for ‘Cool Blue Lightning’ and ‘Zombies on ‘Zambonis.’

Tom Beaulieu has been playing music for almost a quarter of a century. In the ’80s he played with Porges Band, and later played backup guitar for Vic Wotherspoon in the ’90s. Today, his past two releases, ‘The Bird Houses’ and ‘Zombies on Zambonis’ were revered and celebrated on a number of stations, including KALX, WDIY, WMFO, and Radio Marabu.

Those interested in adding new music to their rock playlists, reviewing ‘Cool Blue Lightning,’ or interviewing Tom Beaulieu can reach out via the information provided below.

About:
Tom Beaulieu went above and beyond in 2019 releasing not one but three rock albums, including his latest ‘Cool Blue Lightning.’