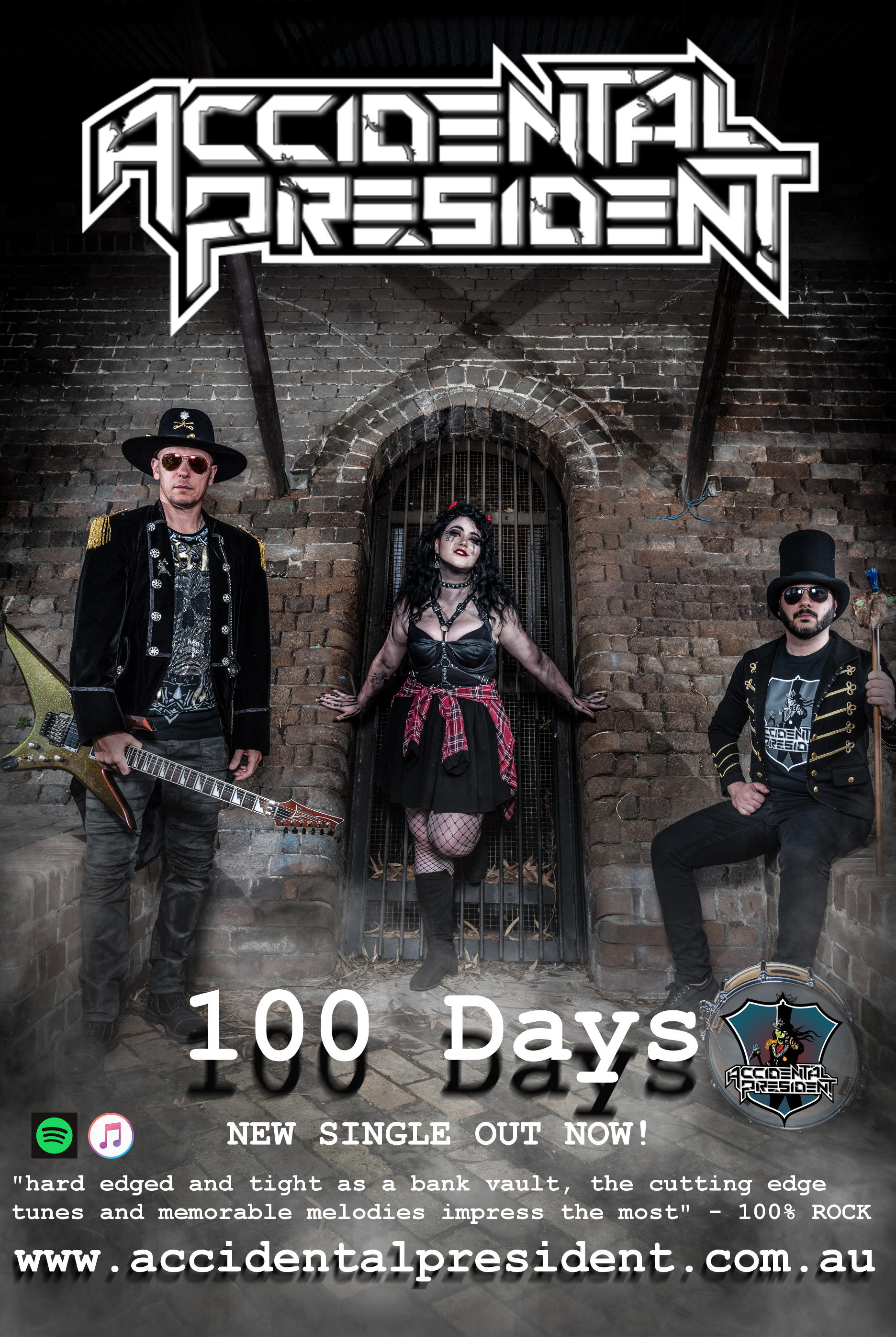 A follow up to 2017’s debut ‘jiggery-pokery’ & 2018’s ‘The King is Dead’, this riff-driven, harmony infused, romper stomper, demonstrates just what can happen when multiculturalism brings together a Wild Child Aussie Orator, an English Guitar Punk & a Manic Drumming Turk.

A female-fronted rock 3 piece out of Sydney with a harmonically driven hard-hitting sound, Accidental President is earning plaudits for their dynamic LIVE show, artistic concepts & showmanship.

Available via ALL the usual Digital outlets, 100 Days is OUT NOW!

“Original rock ‘n’ roll carnage, these performers are impossible to ignore … Stadium-rending riffs, crushingly dramatic builds and a hard, echoing vocal. This is Accidental President …” Happy Mag (Aus) “Hard-edged and raucous, definitely post-grunge and as tight as a bank vault………it’s the cutting edge tunes and immediately memorable melodies which impress the most.” 100% Rock

Accidental President is Bethany Neville (Vocals), Dave Ben Lee (Guitars & Vocals) & Alper Akin (Drums). Technically, ideologically & inspirationally committed to their musical craft, the Accidental President is an Alt-Rock force with a social conscience. And NO they weren’t named after a ‘certain’ President, but before all ‘that’ kicked off! They are currently in the studio working towards their debut album due out late 2019.

Flag Bearers & Agitators, it’s time to stand and be bold. Fierce, Authentic, Hard-Hitting Rock is the soundtrack. Check out the new single & video for  ‘100 days’ at www.accidentalpresident.com.au Stream/purchase via most popular digital outlets.

EST. 2015 – Visionaries NOT Followers, Accidental President are a female-fronted rock 3 piece out of Sydney with a harmonically driven hard-hitting sound. Following their formation in 2015 leading to their well-received 2017 debut EP ‘jiggery-pokery, 2018 saw the return of Accidental President with an exciting new line up for their 2nd release ‘The King is Dead’. Guitarist Dave Ben Lee was joined by the prodigious Beth Neville on Vocals. A creative force of nature in her own right, Beth slotted right in with the AP sound, outlook & attitude, bringing her own inimitable style & flair. Spinal Tap-Esque Bass meltdown & Drum explosions also resulted in a revision of the rhythm section with the recruitment of genuine Hard Rock talent in the form of Alper Akin, bringing an exciting harder-edged percussive sound alongside a hybrid of 4-string & analog synth Bass.