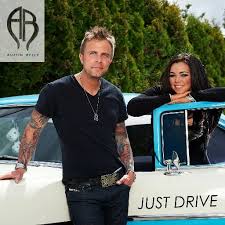 About the Artist: With a blend of Country and Pop/Rock backgrounds, Austin Belle is equipped with the perfect combination of well-written songs and talented artists. Lead guitarist and songwriter, Jesse Wainwright, hails from the hit-making, award-winning rock band State of Shock, lending his musical skills and incredible stage presence to the group. Wainwright is balanced by lead singer and songwriter, Stacey McKitrick, a JUNO award-winning artist already known to the Country world. Together, they create a new sound that can only be described as magical. Along with a talented backing band, their catchy songs and energetic stage show leave audiences wanting more. Combined, they have had the opportunity to perform with notable acts Lady Antebellum, Dierks Bentley, Aerosmith, Bon Jovi, Great Big Sea, and more. They have won numerous awards, including a JUNO for ‘Single of the Year’; Canadian Radio Music Awards for ‘Rock Song of the Year’ and ‘Adult Contemporary Song of the Year’; an Indie Award for ‘Independent Single of the Year’; and a Western Canadian Music Award for ‘Rock Recording of the Year’. They are opening doors at every opportunity they are given, so keep your eyes on them – they are a talented force to be reckoned with, determined to rise to the top!

“Just Drive” is a red hot 5 song EP and as a result though far from a self-indulgent ego trip, rather a moving and elegiac artistic statement from start to finish. Ironically – this is not your overly predictable Ramen Noodle Pop Artist. Instead Mckitric & Wainwright deliver a catchy, hooky, breathtaking musical staple and could even be classed as a 4 genre artist: Folk, Blues, Rock, and Classic Americana. These 3 have way too much precision and clarity to live in the shadows of overly-predictable Pop. Indeed this is clearly evident in songs like “Back Where We Belong” and “Forget about You” and “the title track which methodically ups the ante to a very respectable level of catchy musical expression and craftsmanship that transcends pigeonholing. The music is extremely commercially viable with a fresh sound and an entertaining vibe that holds the attention span of the listener perfectly. In a nutshell this is Gretchen Wilson meets Lady Antebellum. I can also hear Little Big Town, Kellie Pickler, Martina McBride, Sara Evans and Ashley Monroe. The 5 song line-up comes fully loaded and appeals to many listeners with a wide variety of musical styles

Criticism: More vocals from Wainwright – even in a subtle way where you know he’s there – in doses every now and then.

Bottom Line: Overall I find the “Just Drive” EP full of energy and an amazing amount of potential as 2014/15 unfolds. I would imagine in time we will hear more from this artist via Movies, Film and TV Productions and of course on Prime Time Radio. No doubt Austin Belle and Jesse Wainwright have carved a marketable niche for themselves thus far setting themselves up for even more marketable success over the years to come via their good productions and solid live performances.