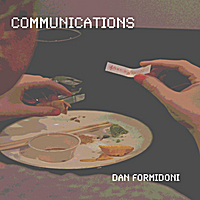 Dan Formidoni’s “Communications” is a pop rock record that set an upbeat mood. “One Brighter Light” has a light pop rock sound that verges on the adult contemporary. It sets up the mood for the rest of the album. Jessica Mack lends her voice to a solid performance on Dan Formidoni’s “Can You See Beauty?” That’s not the only duet found on “Communications,” Michelle Gordon also helped out on “Listen.” Both girls did a great job and only added on to make an even more well-round record. If you were listening to a soft rock station you would hear the sounds and styling’s of Dan Formidoni in between Michael Bolton classics and the latest from Norah Jones. Songs like “Thursday Night,” “Teddy the Ghost,” and “At This Place, On This Corner…” would all be on FM stations daily playlists due to the way they are easy on the listeners’ ears. If you’re into artists like Dream Theater and Dan Fogelberg, check out Dan Formidoni. (https://www.cdbaby.com/cd/danformidoni)