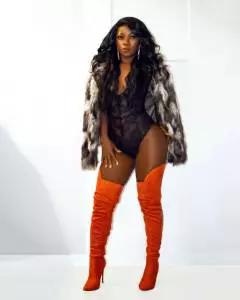 Mankato, Minnesota – October 18, 2019 – If there’s something Freda cannot do, she has yet to find it. A talented queen among the masses, she’s not only a dancer, film producer, model, actress, dancer, and songwriter but also a hip hop artist who is setting the world ablaze with her latest single, “Mater.”

“Mater” comes out of the gate with pure heat. Like many of her peers, Freda is not playing nice when it comes to hard-hitting lyrics backed by beats that are straight fire. Get this though, “Mater” is just the tip of the iceberg when it comes to what Freda has up her sleeves as she has two other tracks waiting to catch the world’s attention. For you see, “Mater” is just setting the basis for what’s to come.

Born and raised in Nigeria, Freda has been performing since she was a mere five-years-old but didn’t start to embark on her professional musical journey until early 2019 as she wanted to build a family first. On top of her music, Freda is celebrating the September 2019 release of her movie, Alexandra. Freda stars as the lead alongside none other than Vivica A.Fox and Joseph Benjamin. Alexandra is available on iTunes, Google Play, as well as Amazon.

Those interested in adding new hip hop music to their playlist, featuring “Mater” on their site, or interviewing Freda about her invigorating career can reach out via the information provided below.

For more on Freda visit: https://www.fredasteffl.com

About:
Singer, rapper, producer, dancer…the list goes on and on for the multitalented Freda whose new single, “Mater,” is available now.