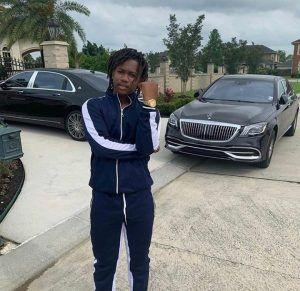 Atlanta, Georgia – April 15, 2020 – There is no shortage of great music coming from the mind of the Atlanta-based rapper Hustlemantherapper. With an EP and a few singles out already this year, 2020 is his to own.

Hustlemantherapper dropped an EP this year titled, “Undecided.’ Four-tracks deep, this EP is just the tip of his ever-growing musical iceberg. Along with his killer EP, Hustlemantherapper also released a few singles not found on ‘Undecided;’ “My Wrist,” “Bands,” and his latest “Get Rich or Die Broke.” With that one, Hustlemantherapper brings his a-game and comes across as a radio-ready artist who could hold his own next to the likes of mainstream artists tearing up Top 40.

While he was a Future fan as a kid and has been compared to mumble rappers in the past, Hustlemantherapper notes, “I wouldn’t consider myself a mumble rapper, because I don’t know what that is. But when I talk, I mumble.” Humble, honest, and straightforward – Hustlemantherapper just does his own thing how he wants and if people want to label him, that’s on them. He just makes music his way, for himself.

Rapping since he was 12-years-old in the basement, Hustlemantherapper went on to teach himself how to produce, mix, and engineer so that he would never have to rely on anyone to make his music pop the way he wanted it.

Those interested in adding “Get Rich or Die Broke” to their playlists, reviewing ‘Undecided,’ or interviewing Hustlemantherapper for their podcast, site, or radio show can reach out via the information provided below.

About:
From an EP to a few singles, Hustlemantherapper has shown no sign of slowing down when it comes to dropping new music in 2020.