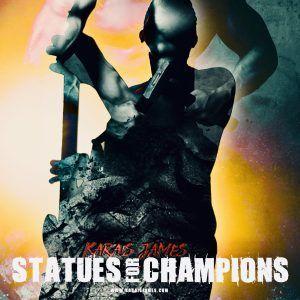 May 11, 2020 Bobby Miles
Uncategorized
No Comments

‘Statues for Champions’ Out Soon

Dix Hills, New York – May 5, 2020 – Karais James has a new record on the way, but before this versatile rocker delivers ‘Statues for Champions’ to the world, he’s giving audiences a taste of what’s to come with not one, not two, but three singles – all out May 11, 2020.

When it comes to being a true original, Karais James is fearless. Never one to stay within the confines of a genre box, he keeps his rock base flourishing by adding elements of hip hop, blues, and country into his music. The result being something that can only be described as Karais James. He’s brought that signature style to three records so far, and will continue to do so with the 2020 release of ‘Statues for Champions.’

Audiences will get a hint of what to expect from the rest of ‘Statues for Champions’ on May 11, 2020, when Karais James drops a trio of singles; “Statues for Champions,” “Here,” and “@Midnight.” While not officially out on all major streaming platforms, such as Spotify, until May 11 – Karais James is giving lucky fans a chance to hear the tracks on YouTube early. Head there now to check out the tracks’ official videos.

Those interested in adding new multifaceted rock to their playlists, featuring one or all of his new singles on their site, or interviewing Karais James for their site, podcast, or radio show can reach out via the information provided below.

About:
Karais James drops a trio of singles ahead of the release of ‘Statues for Champions.’