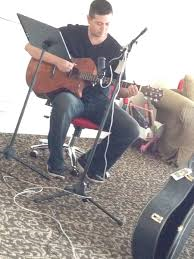 Stocked full of hooks and a laid back playing style that never lets it’s guard down, to melodies which linger long after the playing has passed, “Fly the Coop” by LA based Mark Gothard provides 13 intense  and inventive tracks which play like new adventures, yet approaches them like old friends you feel you’ve known for a long time. This latest release pleasantly embraces the ears and is in a league all by itself with an elite spirit of eagerness and vibrancy. The unique melodies soak every accomplished note from the beginning of “What You Come Here For” through to resolved end of “Down Here”. It offers many musical familiarities, wearing those inspirations proudly on its sleeve showcasing eclectic musical influences hinged on impressive musicianship and a unique yet dark signature sound.  Case in point: This is one of the most fascinating artists I’ve heard in quite some time. Personally I can hear traces of Neil Young, Chris Isaak, Tom Petty, John Hiatt, R.E.M., Ryan Adams and The Boss. Call me crazy but at times he sounds like a modern day version of Johnny Cash. It’s fair to say that the CD does not come down from the high of Track 2 “Month of June” and keeps you in a relatively intellectually “realist”, heavy hearted mood throughout.

Though it certainly provides a consistent balance of genres listed above. As the CD slowly advances the melodies, addictive hooks return sporadically from time to time with a beckoning potency far away from the mediocre mainstream. Bottom line: there’s something much more tangible about this release compared to most of the CD’s that slide across my desk this year – seems very pure, honest, and tells it like it is. All tracks emerge from a modest sonic space thus producing much in the way of thick bass lines, thick vocals, rock solid rhythm guitar, earthy yet thick thymes and consistent feel. The instruments, and subsequent “loose as a screw” movements provided by this experienced band will leave their mark on you instinctually and inspire the imagination. Gothard’s voice does not jump out but has a modest quality which defines itself and work well within the setting of each piece. His mesmerizing baritone coupled with the acoustical exuberance paints you an impressive picture upon a vibrant musical canvas that is quite groundbreaking and wills top you in your tracks.

My favorite track is probably a toss-up between “Dive Bar Lawn” and “King of Love” a close second. “Virgin” is another stark piece offering waning poetic ambience and sure musical direction. “Limousine” had me rolling in the isles. Though maybe this is one song which fails to linger and return like the others, but is a stark, riveting tidbit nonetheless.

“Fly the Coop” by Mark Gothard is a good and lean 13 Track listen any way you slice it. It’s a ripe musical invitation into the world of an above average singer-songwriter from the LA area. Gothard’s voice is his strong suit. “Fly the Coop” will satisfy many, thus filling the void left by millions of band who cannot dive this deep – not even close. This outlier style of music is not only mastered by Mark Gothard, he also deserves a much wider and attentive audience to say the least.