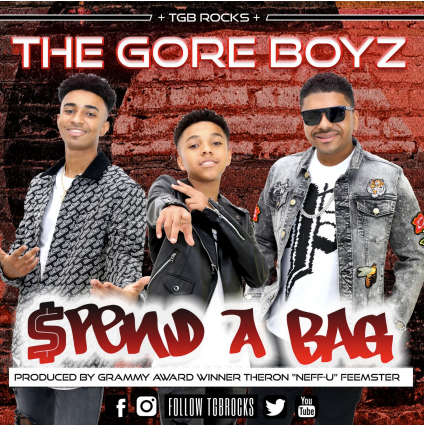 Gastonia, North Carolina – January 24, 2021 – The new generation is already gearing up to replace today’s popstars. The new talent is redefining the music industry like never before. Part of the new generation is the group, The Gore Boyz.
Being unique in the music industry is difficult, but The Gore Boyz have managed. The trio, consisting of Edwin, Herman, and Sean Michael, has managed to perfect the blend of Motown, new school, pop, hip-hop, and R&B. This melodic blend of genres appeals to a large audience.

Keeping the unique sound, The Gore Boyz released a new single, ‘Spend A Bag,’ that has attracted listeners of every kind. This audience doesn’t come as a surprise either. Despite their young age, the trio has become well-versed with the music industry. Having been mentored by the likes of Usher and Jackson Five, The Gore Boyz are making big moves.

The group is great with their music but have branched out to dancing as well. In an effort to constantly improve, the trio learned how to dance to enhance their performances. Their efforts paid off when they performed with Justin Bieber on his Purpose tour! The group’s Sean Michael remembers dancing on stage with the world-famous singer himself! Apart from their various accomplishments over the years, The Gore Boyz are humanitarian by nature. Having been troubled by the COVID-19 pandemic, the boys have used their social media following and are distributing COVID-19 survival kits to do their part.

In between all the work they’re doing with different artists and doing their part for the world, the group has released a new single, ‘Spend A Bag.’ The song talks about young love and what it does to a person. Unlike every other song, ‘Spend A Bag’ talks about how young love can bring money, time, and devotion!
The new single ‘Spend A Bag’ is available to stream on all major platforms. The song and more on The Gore Boyz is available on the official website. Make sure to stream the new single and check out their social media!

The Gore Boyz is a trio made up of Edwin, Herman, and Sean Michael. Originating from Charlotte, North Carolina, the boys made a name for themselves in the music industry at very young ages. Having worked with stars like Justin Bieber and Usher, this rising band is doing their part for the music industry and the world.