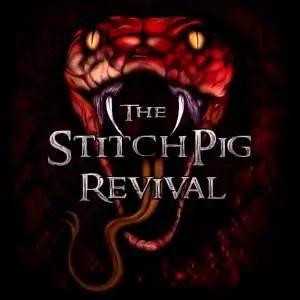 Lawrenceburg, Indiana – January 31, 2020 – When it comes to style, The StitchPig Revival is like a big pot of stew brewing over an open fire. They deliver a jam-packed rock with hints of country, metal, blues, and a little ‘Deliverance’ as they utilize everything from banjos to harmonicas. Their debut self-titled is truly a treat for people who love to go against the grain.

‘The StitchPig Revival’ features 10 radio-ready rock tracks that each brings a unique perspective and style to the table. So those that pull up a seat will leave full when they take a big bite out of songs like “Rattlesnake Bite,” “Wanna Be Like Him,” and a special cover of David Allan Coe’s “The Ride.” The new kings the rock scene are revival rock swamp guitar powerhouses that are unlike anyone currently representing the genre today.

The StitchPig Revival is made up of former lead vocalist of Asphalt Ballet Gary Jeffries, Joe Riley who is a renowned guitar player who’s played with everyone from Liquid Fire to The Might Swine, and their dynamic drummer Dann Norris who played alongside Riley in The Mighty Swine and Adam D Tucker Band. Together these three have proven one can do away with genre constrictions and just rock it out in a way that’s both electric and down-home swamptastic.

Their debut ‘The StitchPig Revival’ is available now on their site as well as on CD Baby. Those looking to download and stream can do so when it hits Spotify, iTunes and every other major outlet on February 15, 2020. Also, stay tuned because The StitchPig Revival have a huge US tour planned for the coming months.

Those interested in adding new rock to their playlists, reviewing ‘The StitchPig Revival,’ or interviewing the band can reach out via the information provided below.

For more information on The StitchPig Revival, please visit: https://www.stitchpigrevival.com

About:
The StitchPig Revival is rocking it out with a side of swamp with their self-titled debut and their upcoming US tour.