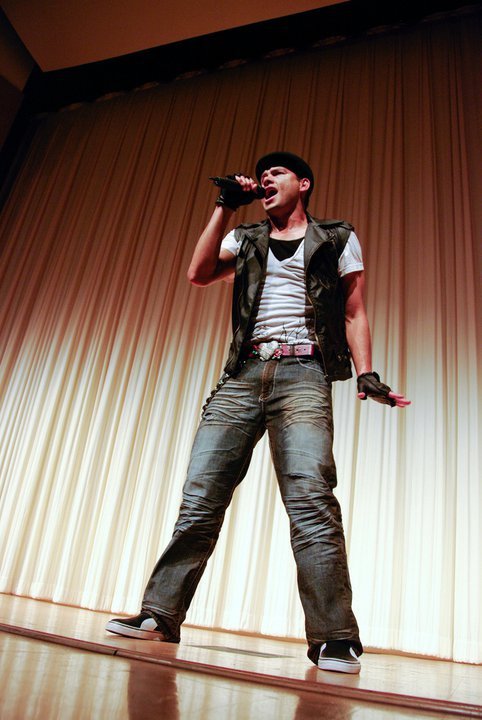 Over the years we’ve seen rock, pop, and even hard rock slowly erode into over-commercialized, corporate puppet shows providing music that is extremely sing songy, predictable, popish and highly corporate. I hereby call this new breed of music “Poser Rock” and I want to personally thank all the corporate giants for successfully transforming “Sex Drugs & Rock n’ Roll” into “Yoga, Vitamins and Nikelback” Of course millions of musical lemmings don’t know the difference and trust me when I say  not everyone is entertained. Talking to many music fans out there the response is overwhelming. Give me something new, something fresh, and something real. So across my desk slides the new 11 songs CD by Southern California’s own Xavier Toscano. Xavier’s music is influenced by Top 40 radio and video. It can best be described as enthusiastic, energetic, dance-urban pop. He also blends his love of disco, rap, rock, reggae, and R&B with his dancing ability to create a dynamic stage show. Xavier has performed across the United States and Europe, and continues to entertain locally. Wherever Xavier performs, he is always praised for having a “ton of energy.” Combine that with his strong stage presence, and you have well rounded entertainer who puts on electric and engaging show.During my initial research of him and a first listen to this 11 track offering, there were a few thing I noticed. Their recordings showcase the eclectic songwriting approach: from upbeat, musically-involved pieces to simple, minimalist light hearted tracks to unusual studio creations all contained therein. These recent recording presents an interesting, melodically-challenging, literate (even uniquely tasteful) collection of songs. It may not be the simplest collection to digest, but its rewards are manifold, and at the center of each piece and every arrangement is an effective, if often exciting and somewhat electric melodies that really suck you in like a drug.

Feels So Good finds an artist like Xavier Toscano channeling (rather than being inspired or influenced by) a wide array popular-music-history’s critically renowned underground heroes: Take That, JLS, Mika, Jason Derulo, Bruno Mars and Talo Cruz. What I heard put a smile on my face. It’s an impressive snapshot that delivers solid songwriting with a nice electro-dance feel. As a singer Toscano is one of the best singers I’ve heard in quite some time within the Dance Pop Realm. He really lets loose behind the glass and just let’s it rip. You will also hear a side of Alternative Pop-Rock that is somewhat progressive in nature. If you like the above artists you should definitely check out this CD.

My favorite track is probably “The Remedy (Feel Alright).” Another notable standout track is “Never Wanna Leave”. In the end “Feels So Good” by Xavier Toscano is amazingly vivid. Vivid in the sense that it will lift your spirits, and give you a sense of hope that good music is not officially pronounced dead yet. This 11 track CD is a solid release with many solid grooves with a dance driven sound and entertaining sometimes poppy vibe. At the end of the day it’s a CD that gives us a fresh glimpse at an amazing artist and takes us back a few years – before everything started sounding like – well like everyone else.