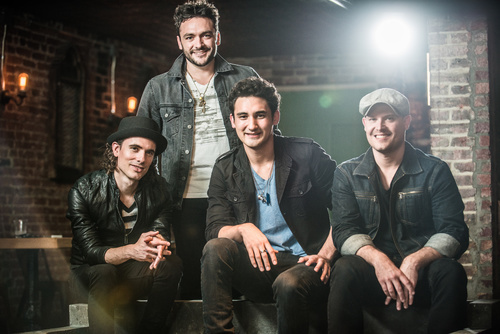 The pop-rock band (or modern rock quartet, as they call themselves) Honor by August have released a new 4-song EP, appropriately called “Four Sides”. The band has been growing in popularity, especially after their great album “Monuments to Progress” that was fully funded on Kickstarter. You could’ve heard their music on popular shows like ESPN, E! and MTV. Honor By August have already had the chance of working with some of the greatest producers like Jack Joseph Puig (he has worked with U2, The Rolling Stones), Paul David Hager (Goo Goo Dolls), Jeff Juliano (John Mayer), Toby Wright (Third Eye Blind), and Jim Ebert (Meredith Brooks).

The men behind Honor By August are Michael Pearsall (lead vocals and guitar), Evan Field (guitar, piano and backing vocals), Chris Rafetto (bass, piano and backing vocals), and Brian Shanley (drums and percussion). Their music has often been compared to giants like Nickelback, U2 and Bon Jovi – if you’re a fan of these, make sure to check them out!

Honor by August have a couple of albums behind their backs and the knowledge and experience they’ve gained greatly contributes to the quality of “Four Sides”. They’re confident in who they are, what their style and their music is without it seeming pretentious. The EP opens with the lively “Mad Mission”. It’s followed by “The Way You Move” – a beautiful confession of love, mixed with a bit of melancholy and even a sense of loss. The song reminds you of the “one that got away” in that sweet, not all that painless way. As the album progresses we come across “Scarecrow”. The lyrics, although a bit creepy (“Like a scarecrow / fatefully I’m watching over you / I’ll be the one outside your window” – c’mon, guys, that’s not cool, don’t do that!) still manage to pass as romantic and are sufficiently funny for you to move on from the pain in the previous song. Nice move, Honor By August! I’m sure that wasn’t on purpose… However, the song is great. “Four Sides” ends with “Hey Mamma”. This optimistic piece suggests that fight with your loved one shouldn’t break your trust in one another and that there’s always hope for them to come back.