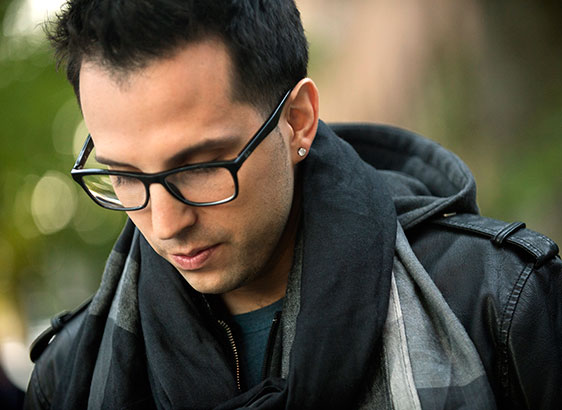 Ryan Aderrey is trying. In a snake pit of talentless Kens and Barbies demeaning themselves to please the bitch goddess of mainstream success, Aderrey immediately distinguishes himself by refusing to build his entire act around cynical pandering. A strong pop sensibility pervades his music, but it’s unlikely we’ll see him on a teen magazine cover sometime soon. Instead, like his first hit “A Miracle, My Love” proves, Aderrey brings unique talents to bear on the modern pop song and recognizes pop’s theatrical potential. He’s carried these talents and lessons over to his new single, “Breathe the World In”.

It succeeds despite a handful of weaknesses. Pop producers are responsible for an assortment of musical crimes and one of the worst announces itself here with oppressive regularity. The drum sound, a machine-like thud with no discernible swing, occupies an inordinate part of the mix and distracts listeners from the song’s strengths. There are moments, as well, when the song plays too premeditated and pieced-together. The inclusion of a rap section and a section when the music stops long enough for listeners to hear the sound of a city at night is unfortunate. Both sections add nothing to the song and make little sense in light of what comes before or afterwards. This assessment might lead some to hear the song as thin gruel, a half-finished idea poorly fleshed out.

Those people, however, need to listen deeper. It’s virtually impossible to ignore the song’s rousing peaks, particularly in the chorus, and note how the production reins in the otherwise offensive drum sound. There is an acoustic guitar beneath the electronic and vocal clutter banging a steady rhythm and, despite Aderrey’s occasionally lackluster vocal, the vocal melody is fresh and inventive. Harmony vocals are another key addition that makes the track more appealing. Aderrey’s writing shows an interest in people uncommon to this sort of music and details that enliven the song.

Aderrey isn’t remaking the wheel here, but this single certainly serves notice that his talent has staying power and hasn’t yet hit his artistic peak. Instead, you can discern the consolidation a song like this represents. This is a talent coming together, coalescing around his voice for the future, and following the music in his head wherever it may lead him. It needs more boldness, more bravery, but “Breathe the World In” is an impressive opening salvo from Aderrey’s forthcoming release.