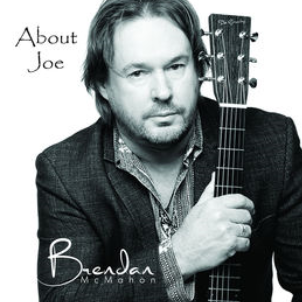 Melbourne singer/songwriter Brendan McMahon, according to bio, has mastered the art of creating songs from a mix of exotic travel adventures and the simplest things, since releasing his 2016 debut album Marker 7-58 under the moniker Satellite Gods. Teaming again with a batch of Australia’s most brilliant musical “gods,” he continues his dynamic musical evolution with five of his edgiest, most emotionally hard-hitting tracks ever on his fresh EP – About Joe – follow up to his well-received 2017 set Universalist. The disc contains his most varied tracks to date, all bringing something new to his music.

“Home” comes rushing quickly out of the speakers and into your head without skipping a note, and you catch everything it brings without having to go back and listen again. This can be difficult when a good opening song hits you for the first time. But it’s a slow-paced ballad with a nevertheless interesting story to tell, so that’s what keeps you focused, but not prepared for what comes next. It’s just the best way to kicks things off, and the following song, “Fall Down” does the order of giving you a lot to wrap your head around in the first two tracks and makes sure to keep your interest for the rest on offer.

There’s two reasons to listen so far, and the next track “Gentleman Joe” gets underway with a minimum of fuss and finds you at almost the peaking point of the EP. But not quite, and you’ll find out it is because although it is the title tracks, there’s more to what the EP is all about in the previous and following tracks. It just centers around the story of Gentleman Joe, and some travels he experienced in northern Africa. The lyrics are most important here, and the track itself does hold the subject at hand, but they all rate pretty-equally, but this track doesn’t have the dominating edge of the following one.

“Doctor” comes into the picture at the right time, with the cure for everyone and everything. And what an outstanding track it is, and probably my favorite which is not an easy decision. It’s brooding compared to the others and you can’t step away from it, as where the others are easier to get back to. He sings in the low register like Tom Waits, Chris Rea and others who’ve popularized that singing style, and it leans more toward the latter artist than the former. It has a real western vibe to it, and the rest is to be heard, it’s enough to recall amazing once you ‘ve partaken.

Talk about a pounding, it’s a melting pot of songs that you’ll be glad you heard if you’re a folk music enthusiast, and pop enthusiast will have plenty to enjoy on this EP too. It’s bound to gain world wide attention for Brendan McMahon, who needs to know people are listening, or why make such efforts to reach them. The musical mindfulness seals the proverbial deal but leaves the chest door open on his music, and it’s worth it to see and explore what else is inside. This EP gets top marks, as it should, and so does Brendan McMahon for achieving it at his usual high standard.