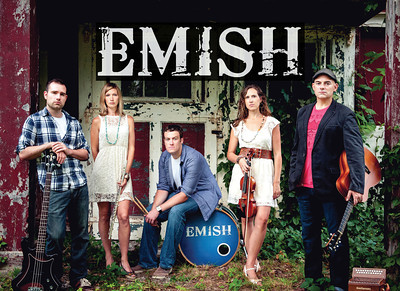 New York Celtic folk songwriters and performers Emish, formed in 2005, have experienced considerable success since the beginning thanks to their distinctive mix of original songwriting and fidelity to traditional forms. They really have struck on a new blend for this sort of music – it recalls the past while still honoring the present and allows their songwriting to find a musical vehicle for self-expression that they show enormous talent using. Their first live collection, simply entitled Live, is a mammoth cross section of covers and tracks from the band’s preceding studio albums and celebrates the band’s tenth anniversary as a performing unit. The live album, once a staple in popular music, has tumbled in popularity through the years, but Emish do things the right way – it’s nearly revelatory to hear so many familiar songs from the studio albums find new and vivid life on the stage, Moreover, the band’s same resolute avoidance of self indulgence continues here as well and the performances are punch and to the point.

Christy Halligan-Brown’s lonesome sounding fiddle and some stormy sound effects open the album. The band’s performance of “Irish Ways and Irish Laws” makes a deep impact, perhaps even deeper than the studio version, thanks to the immediacy of both the performance and recording alike. Bobby Curreri’s vocals on “Haul Away Joe” are even more charismatic on this recording than they are on the album version and the jolting snap of Andrew Hulle’s drumming gives it a lively pulse that’s impossible to ignore. The evocative instrumental “Murder in the Jar” has swirling melodic energy here that the musicians wisely never overplay while the album’s second instrumental performance, “Old Copperplate”, harkens back to an earlier time in the band’s history and receives a zesty, rambunctious performance here that can only be referred to as definitive.

There’s some light effects applied to the guitar on “This Light”, but it never detracts from the overall quality and the harmony vocals have impressive seamlessness for a live performance. It illustrates how well these players, particularly the Curreris themselves, work together with a form of musical telepathy making all things possible. “Heart on a Shelf” is one of the band’s more commercial sounding tracks with Curreri sounding remarkably like a cross between REM’s Michael Stipe and Counting Crows’ Adam Durtiz, but Andrew Hulle stands out once more thanks to his authoritative drumming. Their cover of the Charlie Daniels Band classic “The Devil Went Down to Georgia” is tailor made for Emish, but it isn’t slavish imitation and the band does a remarkable imaginative job of claiming the song as their own. “Back to the Boat” has some leanings to the rock side of things, but it stays connected enough to the band’s traditional influences that it sounds perfectly a part of everything that’s come before. Live albums work best when a band takes material created in the studio’s controlled environs and brings it to vivid life on stage; the band has to be more than a studio creation, however, to make that work. If reading about Emish’s numerous and highly successful festival appearances aren’t enough to convince you of their live prowess, this celebratory collection certainly will.