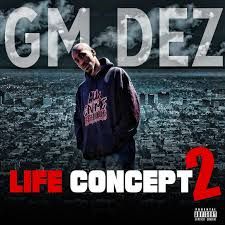 Belleville, Illinois – April 10, 2020 – With his unique approach to hip hop, GM Dez has received local notoriety with three albums, including 2019’s ‘Life Concept 2.’ Now he plans on spreading his reach with 2020’s ‘Nature of a Rebel’ and ‘Underground Star.’

Not many artists can deliver two albums within a 365-day timeframe, but that’s what makes GM Dez stand out from the pack. ‘Nature of a Rebel’ and ‘Underground Star’ will be dropping in 2020, and follow his 2019 release, ‘Life Concept 2.’ His most current release showcased GM Dez’s unwillingness to stay quiet. He speaks his truth, his mind, and is never afraid to let his rhymes deliver true honesty. Whether it’s in “The Blueprint” when he proclaims the importance of sticking to one’s plan no matter what, the importance of expressing one’s thoughts in “On Me,” or how crucial hard work is to success in “Work” – this emcee is preaching the truth through and through.

Work. Not only a song from his last album, ‘Life Concept 2,’ but also something GM Dez does not fear. He’s put in so much over the past couple of years and continues to do so to achieve all he’s set out in his plan. From continuous plans to drop new records to having his music featured across the board on TV and in movies, GM Dez plans on reaching above and beyond to make it happen. With the release of his next records, he plans on getting out on the road more and connecting with not only new fans but hip hop communities outside his own. Be on the lookout!

Those interested in adding new hip hop to their playlists, reviewing ‘Life Concept 2’ to hype up the release of his 2020 albums, or interviewing GM Dez for their site, podcast, or radio show can reach out via the information provided below.

About:
In this world the only thing you can truly be is yourself. That’s something GM Dez does not take for granted. Inspired by those who came before him who created and marched down their own path with their heads held high like E40 and Andre 3000, GM Dez has always strived to stand apart from the crowd rather than right in the middle. Since stepping into the Missouri scene in 2018 with the release of two albums that year, GM Dez has made a name for himself in and around the city. He even left for a minute to embark on a 10-city long tour. Now he’s focused on hitting even more stages with the release of two more albums this year.