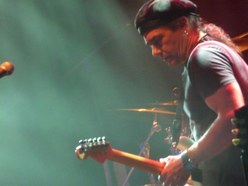 If musicians like Mark Newman are fighting an uphill battle against mainstream corporate music, let’s hope they win. The lack of pretension, passion, and virtuosic skill Newman brings to bear on his new live EP, Brussels, will long outlast the pop song doctors and fly by night rap acts that dominate the modern landscape. Let him keep fighting; in some ways, his music is better for its struggle. This six-song release features five originals and one cover. It isn’t an entirely flawless effort. On his original material, Newman struggles with creating memorable choruses and doesn’t consistently vary the songs, but this is more attributable to his aims as a songwriter instead of any inherent limitation to his talent.

It’s impressive when he finds his mark. “Mean Season” begins the album memorably with its eye-popping guitar work, but one of the aforementioned weakness rears its head immediately. The track’s sole slack spot comes during a chorus that simply doesn’t do enough to capitalize on the strong verses. “Goin’ Underground” has a great vocal and bubbles with energy, but both of the aforementioned weaknesses dog the song. Its insistence on maintaining a single musical path weakens the composition and the repetition of the chorus suggests he tacked it on as an afterthought. His cover of The Bee Gees’ “New York Mining Disaster, 1941” ends the uneven quality of the first two tracks with a masterful reinvisioning of a largely forgotten early folk-influenced classic from the Gibb brothers.

“Dead Man’s Shoes” crackles with lyrical invention not heard on other tracks, but it even collides head-on with some regrettable clichés like “muddy water”. This isn’t 12 bar purist blues, but Newman keeps things firmly grounded in a neo-blues tradition that will seem familiar to any listener. He brings real gravitas to his vocals that helps make the performance memorable. “So, So Cynical” has considerable personality and a surprising amount of humor. The humor is largely self-deprecating and Newman conveys that well with another strong vocal. Brussels concludes with “Must Be a Pony”, but the final track doesn’t work well thanks to uninteresting rhythm guitar dominating the song.

Brussels is a letter slipped under a door, a discreet reminder of Newman’s continued presence in a world of pop pretenders and buffoons. Despite any drawbacks, it’s an enjoyable glimpse into the career of one of America’s best-kept secrets and worth your coin.