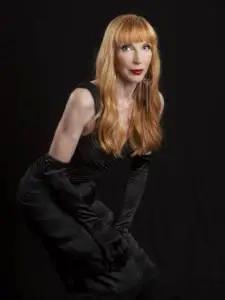 Dallas, Texas – November 4, 2019 – Retro-jazz vocalist Laura Ainsworth has made it her mission to revitalize and reshape 20th-century cocktail/lounge jazz for the 21st century, and this was the year when her efforts began bearing fruit worldwide.

Her third album, “New Vintage,” scored her multiple indie music awards and nominations, “Year’s Best” honors from top radio shows and podcasts such as “Cocktail Nation,” a profile in Downbeat, and a performance on TBN’s “Huckabee” series, now viewable on YouTube. In mid-November, she’ll host the pre-show for the Artists Music Guild Heritage Awards at historic Ovens Auditorium in Charlotte, NC, and is again nominated in two categories. This follows her unprecedented sweep of last year’s AMG Awards, hosted by Thelma Houston. Ainsworth admits even she was stunned to receive five nominations and three wins, for Album, Video and Female Vocalist of the Year:

“Cocktail jazz is a niche of a niche, and I was up against more commercial genres, such as country and gospel. But the AMGs are chosen by industry pros based solely on the quality of music submitted, not fame or major label backing. I never expected to win, so I didn’t prepare an acceptance speech, much less three! By the third win, I was just babbling that I was thrilled people like old school jazz this much, and I thanked Julie London!”

Ainsworth is also spreading her fresh take on retro jazz to new markets, landing a distribution deal in Japan for her dream project, a best-of vinyl LP, “Top Shelf,” after scoring rave reviews and press in several major Japanese jazz magazines. She said, “In Japan, there are many fans of this kind of music, and great musicians keeping it alive and growing. I can’t wait to perform there with them.”

This kind of music is literally in her DNA. Her late father, Billy Ainsworth (from whom she inherited her perfect pitch), was a sax and clarinet prodigy hired at age 17 by Tommy Dorsey in the waning big band days. Years later, she grew up watching him lead commercial jingle singing sessions by day and back showroom legends such as Tony Bennett and Mel Torme by night.

With three albums so far on her own indie label, Eclectus Records (“Keep It To Yourself,” “Necessary Evil” and “New Vintage”), she has enjoyed worldwide airplay and glowing reviews for her sterling band of top North Texas jazz players led by longtime partner, pianist/producer/arranger Brian Piper, and her pre-bop singing style and distinctive, three-octave voice, described by the Dallas Voice as “a satiny ribbon that seems to flow as an uninterrupted river of downbeats.”

Ainsworth’s stock in trade is shaking up a cocktail of old and new styles to revitalize standards and give new life to long-forgotten gems, like the early Frank Loesser song, “That’s How I Got My Start,” that kicks off “New Vintage” (and won the AMG Award for its film noir-inspired video.) She also gender-switched Shel Silverstein’s ‘70s blues/rock tune into “I Once Knew a Fella,” turning an outdated song about “free love” into a hilarious and timely female empowerment romp with a wild, the early ‘60s twist inspired by her dad’s former bandmate, sax maniac Sam Butera of Louis Prima fame.

Rather than replicating old styles verbatim (“It was done perfectly the first time, so what’s the point?”), Ainsworth is inspired by the classic 1950s albums in which Frank Sinatra and Ella Fitzgerald put their own unique, then-contemporary spins on old tunes from the ‘20s and ‘30s. She’s also started recording her compositions, like the award-nominated “The Man I Love Is Gone.” She said, “The highest praise is when someone mistakes it for one of the lost 1940s-‘50s songs I usually record.”

One of her AMG nominations this year is for Video of the Year for “Where Did the Magic Go” from “New Vintage,” a song originally recorded by Tony Bennett as a nostalgic look back at the entertainment era he’d lived through, of Ellington and Basie, Ella Fitzgerald and Fred Astaire. Ainsworth transformed it into a younger singer’s longing for a return to that era of grace, style, and sophistication.

She said, “I believe that right now, people of all ages desperately need a shot of ‘new vintage’ to bring back elegance and romance. I consider that song my mission statement!”