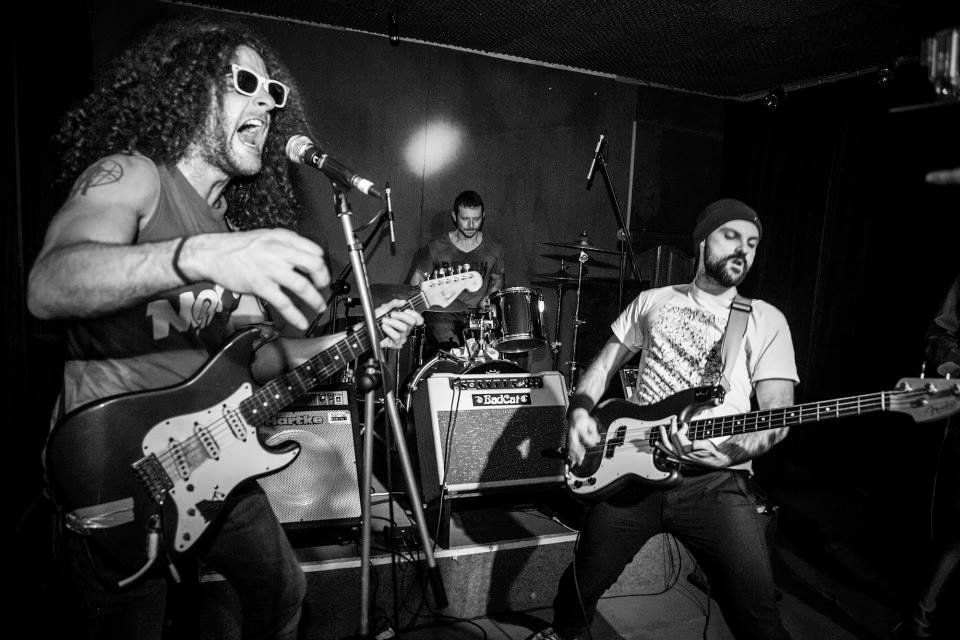 The Shanghai based group Round Eye have shown no mercy nor fatigue in sound development or work ethic and have as of late been a crucial force in bridging a wide gap between the eastern and western hemispheres of DIY punk rock. Along with blazing a trail all over the globe they’ve played host to visiting western punks and some legends as well sharing stages with acts such as The Boys (UK), Paul Collins Beat, M.O.T.O., Ceremony, and Iceage. VICE magazine documented one of their ‘bunker’ gigs in Beijing in glorious baijiu filled detail.

They return with Monstervision, to show they’re not going backwards on their mission. They’re taking the work ethic to the next level once again with a jam- packed album of their own would-be hits. Like they just made the radio and it is playing the whole album. And this is coming from someone who’ve never heard of them until now, and had to back track for some history on this punk rock wonder. But it’s not all punk and none of it comes without excellent musicians to back it. But the ska movement would have been a better place for a lot of what is on this CD. But for all to be found on Monstervision, there is nothing too incendiary to throw it under the bus, as they do everything to please themselves. This record has songs and comedy to balance the otherwise serious lyrics they get way with and don’t stand to lose any punk leanings over. It’s either a mark of success or selling out, but these days both can be worth the effort to accomplish, in a class of genres that isn’t exactly aimed at arenas but does get well circulated. “Commie Blues” is something to think about but it’s all done is fun with the boys really belting out a good opener. It should also be mentioned that comedian John Bloom makes an appearance on this record as a DJ doing some spots between the numbers. And he adds a funny touch as Joe Bob Briggs. The next three numbers “Billy” “Sifter” and “Troma” keep the ranting up and then Joe Bob Briggs has the bridge again and he decides to toss in a what if, about “Billy” and makes way for “Hey Dudes” with all the more fun.  The twangy guitar and swaggering sax give it a great opening before a very rockabilly takes over, not unlike Link Wray would do. Even if you don’t understand it you can’t help but rock to this, which is one of the better points about the whole record and when it ends you just want more of it. The distant bull horn-like vocal effect is what makes this pop the lyric off to get you listening. The saxophones are such a big part of the sound, and some players have come and gone but most notably Steve Mackay, who’s last appearance was made on this record. They don’t dominate every song but they complement them to the point where they come out featured.

Whether you like ska and jazz incorporated punk or dub step and old school new wave it is in there. Swinging into the picture with “Pink House” comes a full-circle combination of everything they do. The mid-section in this song is fantastic, as it plays along in a “Rock Lobster” fashion. But that’s just another complement as this vies for some of the best material on the record, assuming, that is none other than Mackay waddling away on the sax.