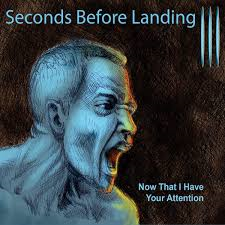 Seconds Before Landing – ‘Now That I Have Your Attention’

The album cover is of a man screaming, it really goes with the title, Now That I Have Your Attention. The blue hue really tones down the image and draws your attention to the music. The introduction song begins with a message about extraterrestrials. It makes for an interesting introduction toan album. 4 AM is the first song after the intro. It’s about aliens and begins with the same announcer discussing an unidentified flying object. Then there is a voice that begins to surface, the voice of someone panicking, “Oh no,” like the aliens are going to get him. Then techno music begins, and he says, “Help me.” This song is very story like and makes the album very interesting album so far. Wondering Soul is next, it is about father and daughter both wondering, the artist is using both meanings of the word here. Lost and questioning.

Head Down Low is next on the list. It’s about being introverted, the techno sort of vibe really holds true in this song. The next song has the same vibe with guitar and high voices singing, “ahh.” A newscaster is also giving blurbs of news reports in this song. Things is next on the list. It starts with bass and begins to slowly pick up the pace with added light notes of a flute instrument being played. It really is dimensional. Come Back To Me, this song begins with saxophone. It’s a love song. The hysterical laughing/crying really is an interesting touch especially with the contrasting saxophone. Even with the strange contrast the sound is nice and relaxing. Feels Good is the next on the list and this piece is defiantly more techno and the song is really defined by this sound. Can I See You Now is another love song in the playlist. It uses louder vocals than other songs on the list, to achieve a surreal quality. The next listed work is Moment in Time. The song experiments with silent pauses and softer instrumentals. In the Name Of is next on the list. It begins with birds chirping and water sounds. Then a voice yells and the guitar begins. Chanting begins with the repeating phrase, “In the name of,” but they do not say what it is in the name of. The sounds fade away, without revealing what it was in the name of.

Without Your Soul is the last selection. A voice begins to discuss the soul, then music plays and soon fades to end the final song . It’s a fitting end to the album. If you want music that is different than your average album, Seconds Before Landing is something you have to listen to. As soon as you think you have this band pegged you will be surprised and that feeling is hard to come by in music. These songs are a listening experience which you should really tune in for. Just as they instruct on their website, tune in, sit down, and really listen. You will not be disappointed.