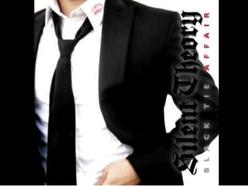 Silent Theory
Ironically, the first single “Livin The Dream” off hard rock band Silent Theory 2011 debut album “Black Tie Affair” couldn’t be more relevant as to where the band are in their career. After forming in 2008, brothers Mitch, Scott, and George Swanger, as well as Nick Osborn and Robert James began their three year journey that ended in being signed to Turkey Vulture Records. They started their journey in home state Washington, playing in cities from Seattle to Tacoma. From there they had golden opportunities; playing at SXSW, played with Jet Black Stare, and made an appearance on MTV Cribs. With the debut album going strong and playing sold out shows, they might be the next big rock band out of Washington.

Vocalist Nick Osborn harsh voice demands an audience and will not disappoint. It fits perfectly with the bands powerful sound. Their sound has been compared to Three Days Grace, Breaking Benjamin, and Saliva and for good reason; Silent Theory is giving us hard rock with their own twist of dirty, edgy, and sexy rock n roll. The power chords intro in “Straight For The Edge” is perfect for any bad ass ride where you feel alive. “No Time To Lose” is all about having some good o’l rock n roll fun as the chorus yelling “HEY! Put your drinks in air.” The song embodies rock and roll-no regrets, live for the now and enjoy the sound.

This band is proving that Washington has more to offer than grudge rock, Starbucks, and indie bands. Their fans are eagerly waiting to see how the band will evolve and what their next move will be. As for now, the band just wants to show the world their passion for music and bringing it to them live since that is the best way to hear rock and roll.