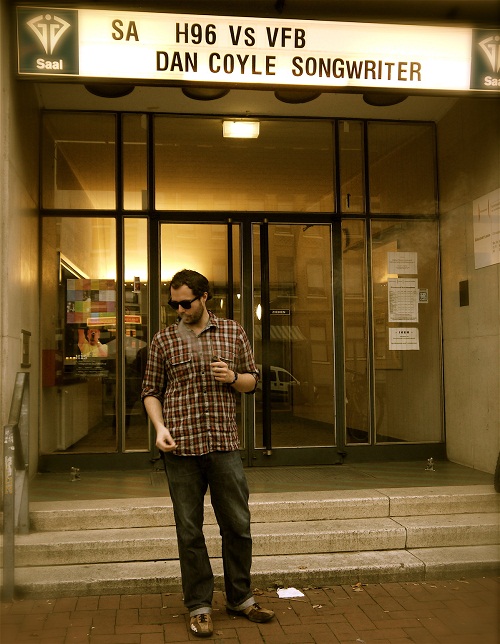 Living in a virtual melting pot for singer/songwriters of every persuasion, New York City denizen Dan Coyle intuitively grasps that setting himself apart doesn’t come down to outrageous displays or a willingness to sell himself off to what Joni Mitchell once called the “star-making machinery”. The six songs on Perfect Word Perfect Beat are products of an artistic vision that cannot help but be true to itself. There is a strong connection with traditional elements, especially blues, that runs through these songs but Coyle is a born performer willing to dramatize his songs in a variety of ways.

His blues chops are in full evidence on the first song, “God, I Miss You”. His opening guitar figure is ripped from chapter one of the Delta blues players handbook and he lays down impeccable work over a lyric that embodies every bit of the longing contained in the song’s title. “Phase of the Moon” is, perhaps, the most traditional performance on the entire album and has a gentle, soothing quality many listeners will find irresistible. The guitar melody has a nice turn that never completely slows the song down, but instead seems to give its mood a mildly dramatic turn in each progression. Lines like “We’re only just outcomes/in a world of imposters” help elevate this track far above the mundane slant its music initially suggests. “The Difference”, however, lacks many of those redeeming virtues. The vocal melody has no real hook for a listener and even the addition of doo-wop backing vocals does little to bring the song added luster.

“Hey There Mama” is a surprising turn. Unlike “The Difference”, which features Coyle doubling his vocal with a spoken word track, this song essentially tries to give listeners two songs for the price of one in a confined space and fails in fully realizing either one. “Surrounded” is a return to the mood and form of the EP’s first half, but there’s an unfortunate sense of familiarity that even Coyle’s heartfelt vocal can’t transform. The EP’s final song, “Nightclub Towns”, revisits some of the same failures of earlier song, but fortunately avoids some of their pitfalls. While the effects treated vocal track is unnecessary affectations that will distract listeners from the song, the welcome introduction of rock and roll elements helps mitigate its weaknesses.

In some ways, this is an oddly balanced album. Nothing is an out and out embarrassment and while he clearly devotes the first half of the EP to a more traditional slant, the second half careens rather freely into uncharted territory and doesn’t always stay moored to Coyle’s core gifts. This solid songwriting doesn’t need theatrical monologues or technological trickery. When Coyle trusts in himself and his own unique gifts, he rarely steps wrong. This is likely just another step in Coyle’s still developing career, but we’ll call it a sidestep rather than a full stride into the future.