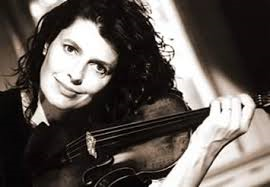 It’s always interesting when someone releases an album so far afield from mainstream preference. We expect bands with a penchant for sonic experimentation or oddball points of view to push boundaries and move further and further away from everyday accessibility, but Anne Lindsay’s Soloworks moves backwards. This eleven song solo debut, recorded within the sanctified confines of a Toronto church, is music from another time. Though other instruments occasionally appear, her voice and violin alone control most of the album and the combination leaves a lasting impression. Some might expect an album like this to lack the necessary firepower needed to draw in modern listeners, but Lindsay is a superb musician whose music remains forever accessible and full of energy.

“Seas Will Rise” begins Soloworks on an ethereal note. Lindsay’s voice isn’t the instrument of some rock chanteuse slumming it with a violin player, but she phrases the lyric with entertaining finesse and her tone is a good match for the violin. The second song, “Pilgrimage to Pushkar”, takes listeners on an imaginative tour through Lindsay’s Eastern music influences while “Tour En L’Air”, an outright classical number, gives the album a much-needed amount of musical gravitas. Much of the material on Soloworks bounces with irrepressible energy and youthful playfulness, but playing on a song like “Tour En L’Air” sounds like more adult in composition and intent.

Her cover of the pop hit “You Really Got A Hold On Me” thankfully escapes sounding like pure melodrama, its final fate in a vast majority of interpretations. Instead, Lindsay turns it into a compelling hybrid, a sort of classical torch song, and the lack of any backing band never intrudes on a listener’s enjoying the tune. “The Dusting Rag” opens with a children’s choir, but unfortunately, the addition does little for the song and feels like it has little to do with it. Judging the song on its own merits, “The Dusting Rag” introduces some new musical influences into the album but, ultimately, never rises above an entertaining trifle.

“Dogs in the Hollow” is another nod towards Lindsay’s Eastern musical influences, though not as pronounced as the earlier “Pilgrimage to Pushkar”. “The Three Bears” returns Lindsay to the classical arena and she delivers a fantastic performance. The composition is able to invoke a variety of emotional voices, but the true strength of the song is how Lindsay imbues each of those voices with fluid musicality. The album ends with her vocal and piano version of the spiritual “Amazing Grace”. Ending Soloworks with such a chestnut can be a good or bad thing, depending on your point of view, but this song is a part of our universal sub consciousness that it provides one of the album’s most accessible points and concludes things with considerable sensitivity.