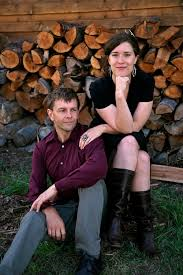 We all have heard that cheesy phrase that goes ¨follow your heart¨, right? Well, as much as by now it sounds really lame and it´s something only a few really believe in – but sometimes when people go for it, great things happen. If you don´t believe me, ask Darren and Beth of March to May, which after leaving music on standby to focus on something else, music came back into their lives eventually joining forces and creating this band.

The Water´s Edge is their new album and man, it´s so good! ¨The Monk and The Lover¨ kicks off the album with its dramatic, intense and minimalistic sound that will hook you up. This is not the folk music many of us are used to. ¨Falling Down¨ follows the same vibe; I really love Darren´s voice reminiscent of Death Cab For Cutie´s Ben Gibbard, it really gives a unique touch to the song and Beth´s few vocals addition is both sweet and haunting. Though everything isn´t dark and depressive, the album also has songs like ¨Georgia¨ and ¨Count The Days¨ that will definitely cheer you up and even get you up and dancing. However, just like many of the great artists and bands from Seattle that found success especially in the 90s, the band stands out for their melancholic songs.

I think there isn´t really any bad comments for this album nor the band, this is definitely a great album and it makes something that only a few records can proud themselves of accomplish, and is the fact that even though they really shine -and what really makes this record so incredible- are their moody, sad songs, their catchy tracks helps keeping a balance therefore the album never falls flat as many out there in the market that have some great singles in it and everything but as you listen through the quality and the excitement fades away or worst, those where all the songs sounds the same and by the third track you are already bored to death.

In the end, the album may not fit today´s mainstream poppy and all party, happiness and cheesy breakup music mold but that´s perhaps the best of this record. If you really dig Death Cab for Cuties or Damien Rice, you will really dig this album.