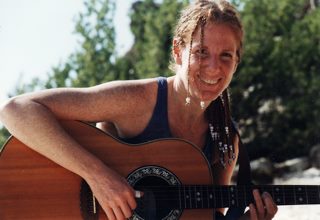 This is a solid release. It has some problems with the production. Beyond that, there are times when the vocals seem a little lackluster. Overall, though, this is quite strong. The other album I reviewed by this artist is more consistent and stronger, but you really can’t complain with this one.

Jangly guitar sounds bring the opening title track in. It’s a pop country song. It’s not bad, but feels a bit tinny in terms of the production. The lyrics have double meanings, and that’s a cool thing. More of a jazz pop vibe is heard on “Time Wasted.” I like this one a lot. It makes me think of a lot of 80s music. It has a better production value than the first song did, too.

Intricate folk music is the concept of “I Can Swim.” There is an Earthy element here. While this is less involved than the two previous ones, it’s also stronger, really. In fact, it’s one of the most successful pieces of the disc. There is more energy on display on “Angel.” I really like the vocal arrangement on this song. It’s a lot like the soft rock on the 1970s. It’s also one that gels better than much of the rest.

World music is the idea on “You Never Can Tell.” It is theatrical. It’s a little strange, but works pretty well. I like the rocking guitar that starts “The Wall.” Somehow this feels a little like some of Alan Parsons’ hits to me. That’s a good thing. I loved the 80s period of his career. This is one of my favorites of the disc. In fact, it’s one of my favorites of the two albums from Anderson I’ve reviewed. I really like the guitar solo on the song.

An olde worlde sound is heard on “Boy.” It’s a folk type song. The music is intricate and delicate. The vocals are gentle and pretty. The whole effect is pure class. It is one of the best pieces of music on the whole disc, really. There is a great jazz groove to “Might Be Spring.” It has a shuffling kind of rhythm. It has a Spring like freshness to it. The energy is moderate, as one would expect for a song about that season, too.

Pretty and intricate, folk music is the idea on “Family Values.” The vocals are among the prettiest and the guitar playing really is, too. It is such a beautiful song, really. Old fashioned music with lilting kind of pattern is what we hear on “Jim.” I love the humor of the song. Although, it’s kind of like that old song “They’re Coming to Take Me Away” because you think that the titular being is a man, but it turns out to be a dog. That’s a great punch line. This is actually my favorite song here.

I like the jazzy energy of “Scenes from a Kitchen.” There are some retro elements. The vocals sort of skirt across the top. Given the way “Jim” turned out, I have expected “John” to be written about a dog. I’m not really sure about the lyrics here in terms of the meaning. I just know that this is a satisfying little folk ballad. The final song is another rocker. That’s a good thing. It’s always a good idea to go out with them wanting more. “How Much” seems to accomplish that as it will have the listener heading for the “play” button to start the ride all over again.