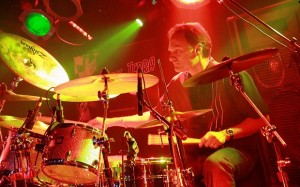 The latest brain child of legendary percussionist Bob Holz is finally ready to be released upon the ears of the world, featuring a dynamic collaboration with some of the most talented names in the business. Joining forces with Grammy-nominated artist Frank Stepanek and renowned New York bassist Mike Shoefter, the trio created a fiery set of tracks for The Bob Holz Band’s debut LP Higher than the Clouds.

Co-written by Holz and Stepanek, Higher than the Clouds descended upon the scene on March 1, 2012, featuring 10 hair-raising, energetic tracks which deliver an addictive platter of musical flavors to the listener. Experiencing moments of rock, blues and funk with a dash of psychedelic influence, the album sees a bonafide trio of musical greats at their best.