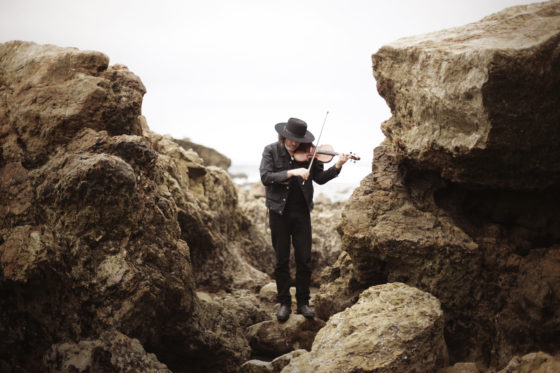 Chris Murphy has complied a musical CV that’s glorious to behold. He’s played alongside marquee musicians and genre darlings alike while pursuing his own artistic vision on a growing discography of solo recordings that respect no genre boundaries and show fearlessness with few parallels on the modern music scene. His latest full length studio recording entitled The Tinker’s Dream doesn’t confine itself to Americana music but, instead, shows a wide ranging command over a variety of styles. It is the third release since May of 2016 and probably the most European flavored of these songs. There are few more instrumentals featured on this release than the previous two releases, but Murphy’s instrumentals are quite unlike anything else you’ve heard in this vein. His freewheeling soloing and melodic gifts are consistently focused throughout each of the album’s songs and he receives superb support from a stellar cast of musical cohorts.

“Connemara Ponies” has an intensely dramatic feel that’s inescapable from the opening seconds on. Murphy’s violin is unstoppable and cuts through the mix with assertive clarity that can’t be denied. This is a perfect song to begin The Tinker’s Dream with and sets the bar high for the remainder of the album. The title song nearly approximates its energy and definitely embodies every bit of its hopeful, pastoral spirit. Newcomers to Murphy’s music will never miss the lack of singing in these songs. Even the secondary instruments like acoustic guitar carry a lot of the melodic load and offer an appealing undercurrent on “The Tinker’s Dream”. “Wicklow” is the first song with some singing and lyrics. It doesn’t disappoint. Murphy has a very laid back delivery, weathered just enough, but it is quite capable of keeping up with the melodic demands imposed by the arrangement.

The second track like that on The Tinker’s Dream, “Cape Horn”, is a songwriting and instrumental extravaganza compared to many of the other songs on this album. There’s a little light humor in the lyrics, but Murphy never hams it up and ties his vocal in tightly with the spirit of the song. “Small Wonder” takes a much more varied approach to its melody while being the last number on The Tinker’s Dream to feature lyrics and singing. The vocal melody here has much more vulnerability than the earlier songs like this. The sea smell surrounding the song “Maritime Jig” is quite credible throughout and has a wonderfully natural sound and movement that, in lesser hands, would sound studied and academic. The album’s second to last track, “The Thistlewood Bridge”, takes listeners in a much different direction than earlier tracks thanks to its more unusual melodic virtues and its willingness to shift gears in unexpected ways.

“The Hayloft Waltz” ends The Tinker’s Dream on a memorable and melodic note without making too much novelty of the waltz time signature. It’s certainly a much more difficult style to pull off than the standard 4/4, but performers are often unable to do it without sounding self-conscious. Chris Murphy, however, sounds like he’s cutting the track live on the floor and it bubbles over with the same effervescent creativity defining the rest of this release.