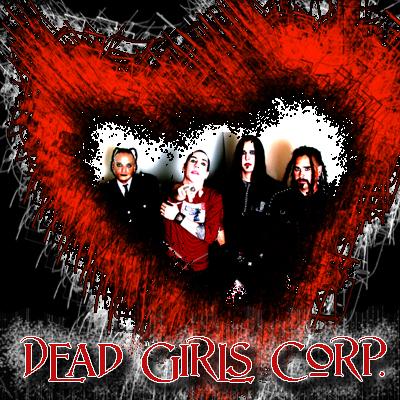 In Hollywood, Ca, a dark alleyway forebodes, connecting Studio 56 and the Record Plant. Music legends of today and yesterday from Elvis, Marilyn and Mel Torme holed themselves into these studios

all of them making records in the same one hundred yard radius. And, like many stories of legend, the lost replaced the heroes, the junkies replaced the giants, and Satan replaced Sinatra. In the middle, another entryway leads to Dead Zone Sound Design, and a band of five. They are on fire with a genuine energy of chaos and a real and obvious disdain for anything. Dead Girls Corporation tear at, bleed on and carve out their own little place in the sun, kicking all who stand in their path in the proverbial teeth… “Don’t get in the way, exclaims the bands fearless leader and brainchild of Dead Girls, Toddy T. “We take no prisoners and we take no shit”. Anyone standing in the room with him for more than 10 minutes can immediately sense that he means every word he says. With an explosive style and seething tenacious work ethic, Toddy T has collaborated with the likes of members of Manson, Orgy, and Rob Zombie, as well as produced Dead Girls full-length debut entitled “I Like Daisies”, at Dead Zone. Imagine Depeche Mode with a beat box through a distortion pedal, playing ultra pop at a Satanic disco. Kerri X burns a hypnotic guitar straight into the psyche. Bruce churns the vulgarity within the soul on his bass. Rob hammers the earth like a sledge, forcing trauma to the body. And all of this abrasion is honed and torqued by the pop-evil song crafting of Toddy T.. “I Like Daisies” is the true 21st century mix of futuristic heaviness and electro-pop radio anthems. Tunes such as “T.V. Baby” and “Gravity” borrow styles from the 80’s heroes without sounding dated. “Problems”, “Angst” and “Sell Your Soul” crank up the attitude of early Ministry and Nine Inch Nails. With the old millennium come and gone, the real Apocalyptic party is ready to begin….