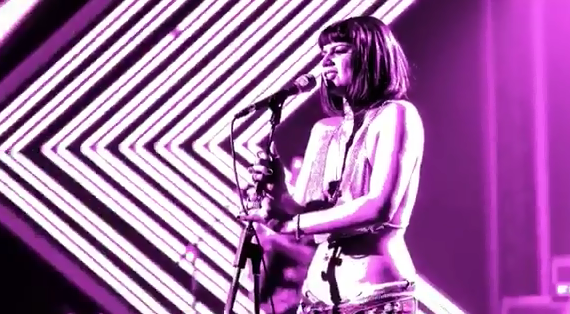 Nadia E, lead vocalist for Los Angeles based five piece Dynamos, spent the first eleven years of her life in the wilds of New Jersey before her family decamped for the sunny climes of Southern California and it’s there where she discovered the clarion call of rock music after a youth spent pursuing training as an opera singer. She soon discovered her classical training proved no obstacle for making a mark as a rock singer and she soon brought in a variety of influences to color her own highly individual way of approaching her craft and sought out similarly minded musicians with the hopes of making music a lifetime career. She’s found those ideal collaborators in her Dynamos band mates – the band’s guitar duo of Jacob Mayeda and Carlos Barrera play with the same on the mark abandon we hear from the rhythm section of musical director/bassist Nick Schaadt and drummer Ian Nakazawa and the four are obviously keyed in to Nadia’s vocal pyrotechnics on the band’s new single “Knowledge”.

They have good reason. Nadia’s lights out effort on this new song outstrips her previous efforts on the fine fall 2017 single “Shake, Rattle, and Roll” and point the way towards a future where Nadia and the band conceivably tackle any style of material. There’s a plethora of recognizable elements in both Nadia’s and the band’s respective styles, but they’ve gussied it all up with ferociously visceral production touches and a committed performance that leaves their contemporaries in the dust/. There’s no substitute for inspiration and, without reservation, Dynamos sound like a band out to stun you each time out. Their efforts to do with “Knowledge” pay off handsomely and prove doubly satisfying thanks to how they never take shortcuts to achieve their desired results. It’s a musical thrill ride lasting a little over three minutes without a second of filler to be found.

Musical director Nick Schaadt has done an exceptional job of tying the song’s disparate strands into an unified whole. It’s continually impressive to hear how the guitar playing from Carlos Barrera and Jacob Mayeda effortlessly stutters, streaks, and struts over the top of bassist Schaadt and drummer Ian Nakazawa’s forceful playing. Much like the lyric writing and vocals, Dynamos are especially talented at providing the song exactly what it needs to wow listeners and not a single note more. This lock on their artistic goals embodies the clarity of their artistic vision and there’s a restlessness we hear in this performance that hints this outing merely scratches the surface of their capabilities. “Knowledge” is a winner from first second to last and an astute choice for their new single – it’s sure to garner them richly deserved attention from new quarters and further propel the band into prominence. The momentum generated by this single and the upcoming third single will undoubtedly carry them to a banner 2018.

One thought on “Dynamos – Knowledge”