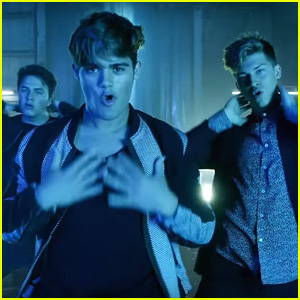 Boy Band Trio Forever In Your Mind continue to take the world By storm with new singles, live dates, and more. From Disney Music Group’s Hollywood Records Comes New Music From the Band that “Has the Potential to Take Over the Boy Band Scene That’s Wide Open For the Taking.” Forever in Your Mind–hit the ground running with the release of their 2016 self-titled EP. And now, with Summer just around the corner, they’ve released their new new double-A-side Hollywood Records single, “Smooth” and “Missing.” Produced by the renowned Dustin Atlas, Eau Noir and Josh Gudwin. “Smooth” is the first of the two, so it leaves no hesitation in describing. And it has already been described as “sporting a serpentine groove and a sleek blues riff.” And that’s not far off when you look at it musically with enough attention to detail as the vocals fight for domination. And together they pull off the right emotion to bode for a single with both delivering the same impact without sounding the same. I would just place “Smooth” in the lead, agreeing it has its right placing. It’s not an easy thing to top, whether you like boy bands and everything this music contains or not. There is a bigger world out there and Forever In Your Mind are exploring it.

This is better than most of these bands that are usually assembled by producers like Maurice Starr who is actually a musician himself but the point is they go onto making these. Forever In Your Mind writer their own stuff, and do some acting and have a lot more going on than you’d imagine if you just listened to these two tracks. And “Smooth’ does the business with its slinky, suave vocals over a cool backing track. It’s not just cute, it’s as gut level as it is slick. Which says a lot about their ability to swing high and low. But those aren’t even things that always matter in this type of music.

What does matter is how the vocals and the beats match and sound together with any semblance. And if the lyrics shine and the meaning does too it’s even better. They play deep enough on both tracks to prove that, but they’ve been doing this over and over. It’s only their latest release and it not only lives up to even surpasses what they’ve been doing. Just as much proof is there to be found on “Missing” with its more up-tempo factors. The two tracks go so well together they would’ve been mistaken to not release them together. But their audience is always there to agree or disagree. I just don’t see how they can like this any less than other songs by them. The idea is to always get better, and to me they have outdone themselves without having to change beyond recognition. They are balancing acting and music, and various other talents and it’s a lot to do, so 2017 is a big year including shows. Who wouldn’t be proud to see their boys up there performing and living the dream, it would make any parents proud, and any parents approve of their music. They’re one of the better boy bands to ever come around, at least in this decade to my ears, and hopefully they’re top them all as they keep banging away. Both tracks smoke the needle.