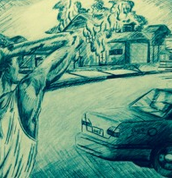 Atlanta is widely known for their hip hop scene but Josias is proving they have more up their sleeve. “All White Attire” has an intro that sounds like the start of a very dramatic television show. You can see the rainfall on the window and you’re not sure what it going to start up when he finally comes in. What comes through it a heavy dose of smooth R&B. He has a R. Kelly feel to him. With “Save Me” he builds up that musical suspense again but this time around hits you over the head with deep soul real quick. The change in the tone just in the intro is ear catching enough. In “Lost In You” Josias gets down to business really quick. Unlike the previous where there was an elongated intro, he works fast here and really strives to make this a key track – a must listen to in his discography. Speaking of, “Listen” takes us back to that drama and that building Josias does ever so often but it really makes you wonder what his live show would be like. One can imagine it’d be more like a full on production than a run of the mill concert. Keep your tabs on Josias and make sure to check out his music if you’re a fan of R. Kelly or D’Angelo. (https://soundcloud.com/josias-king-reynolds)