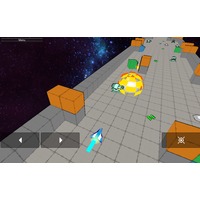 If you would’ve told the world in the ’80s that video game music was going to be an actual thing, they would’ve looked at you crazy. But now they’d be having the last laugh because it’s a worldwide loved genre for gamers out there and Acme Videogames is taking full advantage with that 8bit beat. “Bump to the Beat” of course sounds like what else, a video game. Okay now that was a given. Other than that it sounds like one of those songs that plays as you just do something in the game that’s not that serious – like walking around a level. “Nes FX” has a bit more going on. It sounds more like if Mario and Co. went to an industrial club or something. With “Lazy Pixie” you get a song that could be straight out of the Tron movies. It has a very techy feel to it and almost makes you feel like you’re in an intense running scene. In the end you’ll love Acme Videogames if you’re a gamer or just a tech head. So if that’s you, check Acme Videogames out ASAP. (https://www.jango.com/music/Acme+Videogames?l=0)