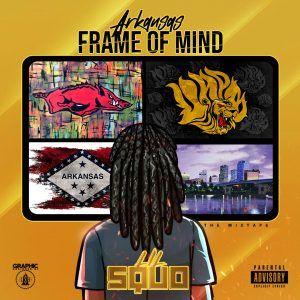 Marion, Arkansas – April 20, 2020 – Reality has a way of changing our focus. One minute we could be planning for college, and the next we’re taking a gap year to travel the world. It’s all about what you need and wants at the time. Some years back, Lil Squo wanted and needed to be there for his family, so he took a step back from music and switched gears. Now, with the encouragement of his daughter, he is back in the saddle with a new album on the way in summer 2020, and a taste of what’s to come with the title track “Arkansas Frame of Mind.”

“Arkansas Frame of Mind” is just the tip of the iceberg of what’s to be expected when Lil Squo drops his first album in years that goes by the same name. For fans of everyone from Andre 3000 to Kendrick Lamar, ‘Arkansas Frame of Mind’ will satisfy the palate of true hip hop fans everywhere from coast to coast to around the world. This album is not only for his daughter but for himself. It showcases the triumph of a man coming back to his own after a battle with cancer.

Lil Squo has been making music for two decades now. He stopped when his family started to take shape as he wanted to be around for his kids and to get away from the negativity the streets can sometimes have on a man. During his time away he rose up to the occasion for his family, battled cancer, and is now back and ready to go for it again with his upcoming summer 2020 release, ‘Arkansas Frame of Mind,’ an album that features 12 tracks and that was done in a mere four months.

Those interested in adding new hip hop to their playlists, featuring “Arkansas Frame of Mind” on their site, or interviewing Lil Squo for their podcast, site, or radio show can reach out via the information provided below.

About:
Lil Squo took an elongated break from music to focus on family, but as a lesson in determination for his daughter he stepped back up to the plate to show her it’s never too late to accomplish one’s dreams.