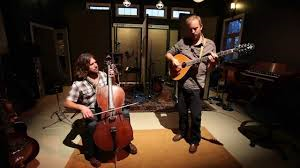 Moors & McCumber are from Colorado, and I hadn’t even heard of them, but on their fourth CD “Pandemonium” their sound hits with a familiarity that makes you wonder where they’ve been if you’ve never had the opportunity to hear this duo with a very complex musical background, incorporating strings galore behind their perfectly blended voices, including mandolin and Irish bouzouki, and it’s all well done on their country laced collection of Americana tunes.

The first track is “Crack A Smile” and it’s something I’d rather they switched out the final track with, but more about that later, as the two are opposites in every way for their placement. This isn’t a problem, just an observation for me. It gets better in-between, starting with “You Take Me Somewhere” with more than a step up in tempo and just a lot more interesting in every way. It’s not that it travels that much higher but it gets things going, which leads to “Everything” which is even better than the former. “No Way To Live” is one of the highlights for sure. But neither compare much to that of “Take Me Away” with its very clinical but entertaining string section and spot on duo vocal performance. This is where things take off peaking and you know this is going to be a good album. The string arrangement is to die for, as they all play in succession together like a spectacular concert. “Buried In The Earth” takes everything further down the right road with a commanding vocal with a spiritual sensibility. This isn’t full on country/gospel but it does keep inflections of it in a holy way. It’s probably the most serious part of the CD. “My Heart Is Open” sounds reminiscent of everyone from Garth Brooks to James Taylor. This is where it gets slightly commercial but it doesn’t hurt the rest of the tracks, it somehow how its place. On “Best Of Intentions” everything gets back on track with a less campfire approach, which is getting back on track well, with a deeper vibe. This is one of the more interesting songs to me, and where the folk really comes out, and it serves as a stress reliever on both ends, a real soothing treat. It’s a well delivered track with some great piano work. “If Living Was Easy” takes things back up in tempo and it breathes some character back in the vocal department. This is another great track which nails another perfect vocal and harmonica performance, which manages to also clean up on the album’s first track. “The Great tragedy” is another pleasing song about loneliness and tragedy. This brings it all down to the final track and what I mentioned would sit better as the opener, because it would serve in grabbing the listener and never letting go. It’s the only thing I’d change on the whole CD, reversing them. “Pandemonium” is a great track on a great album surrounded by plenty of other greatness, and I’d even like to hear a pt. two concerning this lovely hypnotic piece of music which is the furthest they get from the otherwise country heavy sound which dominates it.