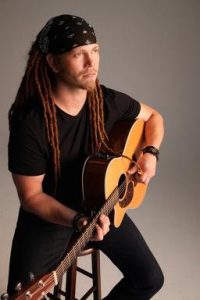 The first release from Michigan born Nick Dakota, Vision, contains a dozen songs from some of the best songwriters working in the genre today. Modern country gets its knocks from purists because its forsaken the traditional and now decidedly un-commercial sound of bygone days, but many of Dakota’s songs are firmly rooted in the classic country sound while even the rockier numbers never desert the country sound entirely. His vocals show remarkable dexterity. Dakota’s debut shows that he’s just as much at home with ballads as he is kick out the footlights countrified rockers and his voice can shift from bellowing to nuance without any apparent effort. Vision is full of life, good times, and experiences that any listener will relate to.

Nick Dakota begins his debut album with the memorable “We’ll Always Have Paris (Texas)”. It’s an amiable, mid-tempo number that, despite the slightly melancholy tinge, is quite entertaining. Dakota shows artful restraint as a singer for someone recording his first album and this sort of characteristic bodes well for the remainder of the release as well as future work. “How Cool Is That?” is slated as the album’s first single. Like the open, it has a comfortable mid-tempo pace and never rushes its effects. Dakota’s voice contains genuine glee as he goes over the down to earth traits that make his girl so great. The sincerity is unmistakable. The music makes all of the right turns and the song, like every other track on Vision, never runs on too long. The ballad “One Last Request” is a rather elegant, stately paced number that, fortunately, never becomes inert. There’s a great deal of life here thanks to the directness of the playing and, more specifically, Dakota’s deliberate but deeply considered vocal. The great singers find a way of getting inside the experience of a song, even if they have never personally endured the events described in the lyric, and Dakota makes us feel every line of this one.

“Fall All Over Again” is a more uptempo piece that, nevertheless, never feels like an impatient performance. Instead, everything is pared down to the bone here and there isn’t even a hint of self indulgence. The tremendous musical vigor is nicely complemented by an equally physical vocal performance from Dakota. “The Deep End” offers up some tasty slide guitar in a surprising nod to the blues, but there’s much more rock and roll spirit percolating in the mix than many of the earlier songs and Dakota sounds perfectly at home in this environment with his strong, confident phrasing. We go on an even bluesier ride with the simply titled “Too”, but despite its intensity, Dakota never loses sight of his mandate to entertain audiences. The tracks “Rain Down Sunshine” and “Heart On Fire” conjure up a number of rockier echoes, but the country music presence in these songs is never far from the listeners’ ear. The final cut “Sledge Hammer” mixes retro and modern in ways none of the earlier tracks attempt, yet it doesn’t sound out of place and has obviously pushed Dakota to deliver one of the album’s finest vocals. It’s a great final curtain. Vision will play well for a wide cross section of music fans and marks the arrival of a major talent.