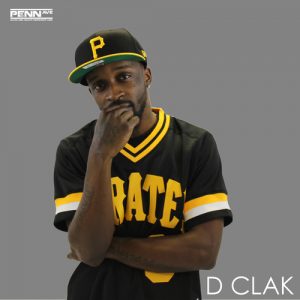 His performing moniker refers to his first name, Derrick, and an approximation of one of the noises a pistol makes before you pull the trigger. It’s an apropos reference. D Clak, a longtime Pittsburgh resident, fires off his lyrics with a measured cadence that varies wildly in both tempo and tone. There’s nothing that this guy can’t do verbally. He twists the words as he sees fit, condensing them, making them elastic, but most of all Clak works hard to present an unified approach. The single “Trap Again” from his debut full length album The Dime Piece shows off a talent for matching his voice as closely as possible with a musical arrangement that doesn’t merely serve as a glorified vehicle for his vocals. The production is immaculately handled. Everything, vocals and otherwise, are invested with a warm aura and post-production effects have been seamlessly worked into the song without any showing any stitching.

The lyrics are plain-spoken but laden with details. D Clak’s intention seems to be obvious, at least in part. He wants to drag listeners into his world and it’s a hard-bitten place. D Clak, however, never minces a single word in the songwriting and finishes the song with the same attitude he began it with. His voice has many of the same rhythmic qualities of the backing track, but his phrasing is just as crucial to the song’s success. He gives an understated, but surprisingly dramatic rendering of the song and has an appealing sound to his voice that a broad based audience will undoubtedly embrace. He makes his first entrance into the song shortly after its first few seconds and, on the chorus, he has a low-key urgency filling his voice that gets the track off to an unusually lively beginning.

The backing track has strong musical elements and definitely isn’t some placeholder for Clak’s voice and lyrics. Despite the electronic origins of the music, it slinks and grooves quite convincingly and is produced in such a way that it has a deceptively live sound. Intimacy is the key. The mix is handled in a way that brings everything up to the forefront without ever overwhelming listeners. The fat bass pulse doesn’t sound like a typical low end instrument, but it has a warm reverberating sound nicely complemented by tasty drum patterns. “Trap Again” ends well and within the right amount of time – running just a little over three minutes, it has the right length for Clak to get his point across without ever overstaying his welcome with the audience.

Pittsburgh isn’t particularly renowned as a music hub, but artists the quality of D Clak has enough talent to constitute a one-man scene of their own. The Dime Piece makes no bones about what sort of world D Clak’s songs hail from and the single “Trap Again”, considered as a representative track from the album, makes an excellent impression on longtime genre fans as well as newcomers.