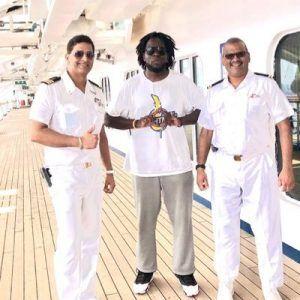 Bear, Delaware – April 21, 2020 – The path was clear for Jay-P Jackson Jr. from the start. His interest in band led him to Delaware State University where his marching band skills led him to play in not only a beloved Disney parade, but at the 2008 Presidential Inauguration Parade. Not every emcee rapping today has that on their resume. Alas, Jay-P Jackson Jr. does and also on that are his 2019 debut EP ‘The XAddiction,’ and his latest release, his first LP ‘BlAck & Mild.’

Audiences can hear that pureness throughout his music from his debut LP, ‘BlAck & Mild’ on songs such as “Throw That,” “Make You Mine” and “Good Loving.” All of which are inspired by a night out with friends, taking over the club, and just celebrating the good things in life that we too often take for granted on a day to day basis. At the end of the day, Jay-P Jackson Jr. is delivering music that audiences across the board can just let loose to. Which in today’s climate, is what’s needed as the entire world rallies to cope with the new reality set ahead.

On top of making music that causes a great listening experience, Jay-P Jackson Jr. also brings best when on stage. That comes from years he spent in marching band well into his college years. He notes of that experience and how it translates into his performances today, “Being in band gave me the experience to learn about performing, traveling, and being part of a show.” Partaking in a Disney Parade as well as the Inauguration Parade in 2008 was just the beginning when he was in the Delaware State Marching Band. Today as a solo artist, Jay-P Jackson Jr. he’s performed throughout the Philadelphia area including at B.E.T. Tales Talent Search, Bourbon & Branch, and beyond.

Those interested in adding new hip hop to their playlists, reviewing ‘BlAck & Mild’ for their site, or interviewing Jay-P Jackson Jr. for their site, podcast, or radio show can reach out via the information provided below.

About:
Inspired by both Jay Z and Rihanna’s music and business minds, Jay-P Jackson Jr. wants his career to follow the same trajectory. He not only wants to create music that sustains audiences for years to come and in that regard is timeless, but also wants to build a name for himself in the industry. So far so good as the solo emcee who can play almost a dozen percussion instruments has released two records filled with music that is both inspiring and exciting, including his debut LP ‘BlAck & Mild.’