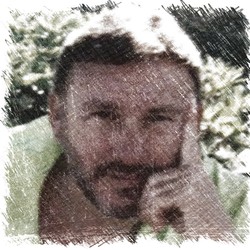 Palmer is a musician who creates an array of moods with his instrumental ways. “A New Light” is a calming song that sounds in touch with nature. It’s almost native. “At First Light” also takes on the elements, starting with what appears to be a storm. Palmer’s music sounds like a movie soundtrack fine tuned. This time around the song has a bit of a Latin flare to it. Then you get something that takes you away from Mother Nature and puts you on a different landscape all together. “Lifetimes” sounds like the intensity of a ’80s movie. There’s a lot going on in it; many shifts here and there to create a sense of drama to keep the listener intrigued. I thought it’d have more of an ocean sound, you know…Aquarian, Aquarius, but “Aquarian Nights” wasn’t like that at all. It played well though and showcased a well constructed song. All in all, if you’re not a fan of what lyrics can do to sway a song – but are finer tuned for instrumental music that’s packs a modern punch, check out Palmer today. (https://www.sonicbids.com/band/palmer2/)